By now, everyone and their brother knows Ichiro’s farewell in Japan was this week, closing out an incredible career that lasted longer than I’ve been alive (including years played in Japan).

Because of that, I wanted to see what Ichiro cards people owned in our Facebook group. I have a 2018 Heritage High Number “Ichi” nickname and Action, but both are at PSA , so I couldn’t contribute.

Two members shared these for us to see:

The first was a Triple Threads jersey card detailing Ichiro’s pinch hit ability (he came within one hit of the single season record in 2017), and the second card was the 2001 Bowman Draft Picks card (remember that one).

With the retirement send-off in Japan, it had me thinking: how much will Ichiro’s rookies rise when he gets inducted into the Hall of Fame?

In 2019, the Hall of Fame elected its first member on unanimous decision with 100% of voters putting him through. That was none other than Mariano Rivera. Whether you agree with the unanimous vote or not, this research is solely to create a possible projection for where Ichiro’s cards could end up if he follows Mariano’s path.

To analyze this, I compiled Mo’s 1992 Bowman PSA 10 rookie sales history from November 2013 (around the time he retired) to today. The popular PSA 10 rookie hit an all-time high of over $500 on the announcement of the unanimous decision. Today, they have dropped, with some selling around $400.

By calculating the precent increase from retirement to Hall of Fame induction, it gives a baseline to work with to project a reasonable value for an Ichiro Bowman PSA 10 rookie.

Am I saying that Ichiro will be unanimous? No, I am not. But it is fun to think about if he was, this is what his prices could look like. Of course, there are more expensive Ichiro rookies out there (2001 Bowman Chrome Japanese Refractor PSA 10), but this is a low-end Ichiro rookie dedicated collectors can afford to pick up. Out of 1,042 cards graded by PSA, only 179 got PSA 10s (17.18%).

While I know the 2001 Topps is a higher value card, the Bowman is a nice alternative especially with not many PSA 10s out there.

Using the 106.48% increase from Rivera, that would put an Ichiro PSA 10 Bowman at $237.43 after he is inducted. I am not sure how the committee will treat his two game 2019 when choosing an eligibility time, but the price comparison works regardless.

In five years when I’m still writing and live streaming, I will be sure to check in on Ichiro’s value when he gets inducted into the Hall of Fame to see how close this rough prediction is. 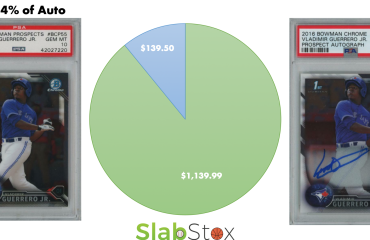