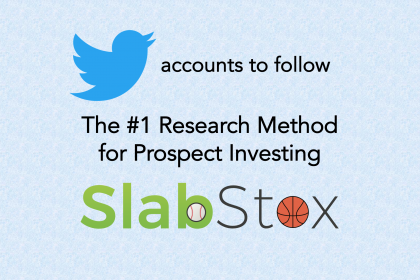 This is the start of a new series here at SlabStox, centered around articles on the things I do to gain knowledge on players to invest in. This series will include articles on subjects such as: who to follow on Twitter, what websites I learn from, what stats I look at, and so on. I hope it’ll be informational for you and helpful for your long-term investing goals. If there are any websites and/or Twitter accounts you think would be a valuable follow, let me know. I can always put it in the article, and I’ll give you a shout out for pointing me in that direction.

First up in our series is who to follow on Twitter. When it comes to social media, Twitter is king for gaining knowledge. I use it every day to follow current events, news in the wide world of sports, stats I’d otherwise not see and anything else that peaks my interests. If you’re not using Twitter for help in your card investments, you’re severely handicapping yourself. Down below I’ll be going through a list of people I follow for all of my baseball related news. If you plan on following any of these people on a personal Twitter account, I suggest making a list (a feature in Twitter to separate people you follow), so their tweets don’t get lost in the shuffle.

1) Any beat writer of any team you’re interested in. This is a good way to get team specific knowledge quickly without having to deal with any of the extra stuff the actual team account puts out. Example: @Haudricourt

2) Specific MiLB team accounts. I use these types of accounts specifically for

information on pitchers I have invested in on that team. Example: @CarolinaMudcats

3) SB Nation Sites twitter. They’re generally not professional writers or evaluators, but they love their own team enough to write about them for cheap. A good source for how locals feel about their own players. Also, a good source for team specific stats that national sources won’t take the time to look up. Example: @brewcrewball

4) @Jaypers413 He is a great follow for MiLB pitcher stat lines, home runs hit by MiLB players, and call up info.

5) @kileymcd Kiley McDaniel is one of two prospect evaluators for Fangraphs. Definitely a useful follow so you don’t miss anything he has coming out on fangraphs.com, and for instant analysis of players he’s tracking. He’s really good at what he does. Well worth the follow.

6) @longenhagen Eric Longenhagen is the other prospect evaluator for Fangraphs. What I wrote for Kiley is the exact same for Eric. He is definitely worth the follow.

7) @jnorris427 Prospect evaluator and editor for Baseball America. He updates in real time on what he’s watching. Provides interesting statistical tidbits. Can’t stress this enough you should be following all of these prospect evaluators.

9) @BenBadler Covers prospects for Baseball America. Does a lot of good work for the July 2nd international signing period.

10) @jjcoop36 Covers a variety of baseball subjects for Baseball America. A great source for baseball knowledge. 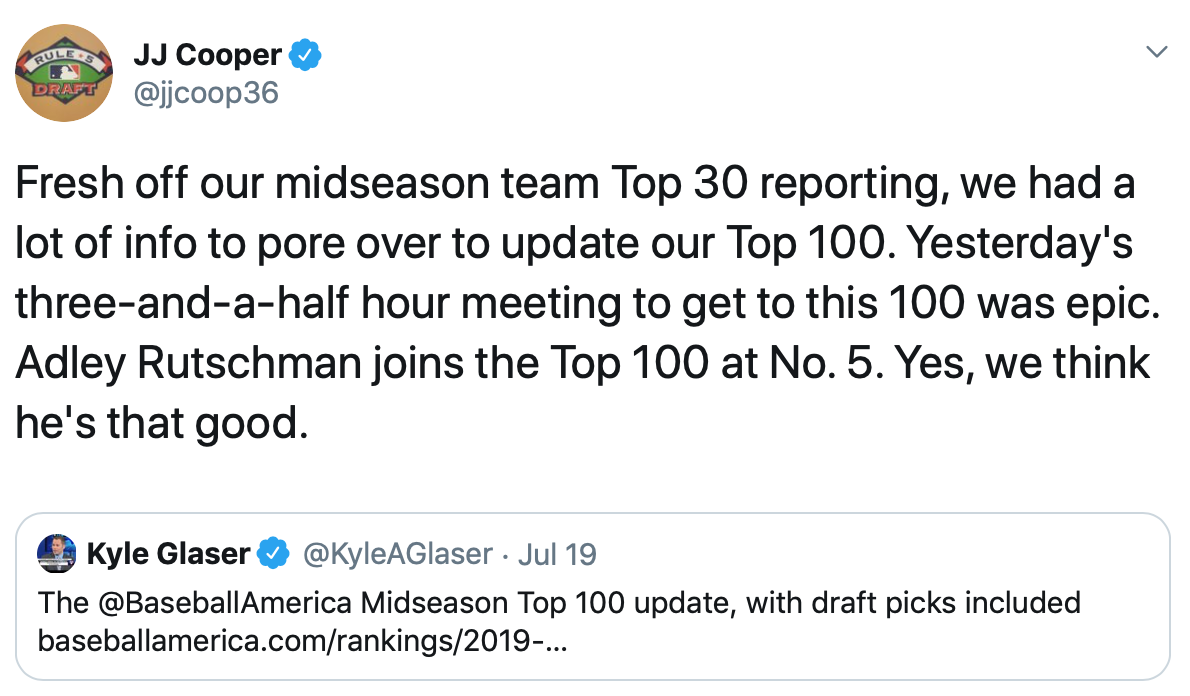 11) @JeffPassan Writer for ESPN. Covers mainly the MLB side of baseball. He will dive into some prospect stats from time to time. Has great longform pieces.

12) @DSzymborski Dan Szymborski is a writer for Fangraphs and ESPN. He created the ZiPS projection system. Half his tweets aren’t about baseball, but there will be valuable information in there.

13) @Crawford_MILB Christopher Crawford is a writer for Rotoworld and NBC sports. Follow for the baseball related tweets, stay for his inevitable tweets about the misery of the Seattle sports scene.

14) @MinorLeagueBall John Sickels was the founder of the Minor League Ball site on SB Nation before it got shut down. He now works for The Athletic. He is very knowledgeable about prospects and does his own top 100 list every year.

15) @darenw Daren Williams is the director of research for the MLB. Tweets out a bunch of good statistics that are valuable to know if you’re an investor.

16) @theaceofspader Ryan Spaeder tweets out tons of obscure facts about MLB players. Not super valuable for investing purposes but is still an interesting follow.

17) @bachlaw Jonathan Judge is a lawyer who does work for baseball prospectus. He’s the founder of the stat “Deserved Run Average” (DRA) which is a better pitcher estimator than FIP. Not all his tweets deal with baseball, but there is some good stuff in there.

18) @jaysonst Jayson Stark writes articles for The Athletic. Long time baseball writer. Not generally useful for our purposes, but a good follow if you’re a fan of baseball.

19) @enosarris Eno Sarris is formerly a writer for Fangraphs who now writes for The Athletic. Has a lot of good info on players. Also a good follow if you enjoy beer and/or sandwhiches because he tweets about them a lot.

20) @NathanRode Nathan Rode is a prospect evaluator for Prep Baseball Report. This account is not mine despite our names being similar. He covers prep players so this is information that will need to be stored and used down the line when these kids are drafted.

21) @CarlosACollazo Carlos Collazo covers the MLB draft for Baseball America. Lots of good info on his account, but it is another account where the info will be useful down the line.

22) @BenLindbergh Ben Lindbergh writes about baseball for the Ringer, and he does podcasts for Fangraphs. Extremely knowledgeable about baseball. If you get a chance, check out his podcasts.

23) @SlangsOnSports Sarah Langs works for the MLB. Tweets out a ton of batted ball statistics among other things of our favorite MLB players.

24) @NickJFaleris Nick Faleris writes 2080 Baseball. Has a lot of prospect coverage on his Twitter. He’s a big fan of players from the midwest which is not common.

25) @megrowler Meg Rowley is the editor of Fangraphs and runs their podcast network. Will always keep you up to date on what’s on Fangraphs. Like Crawford, she is a Mariners fan. Its always nice to read tweets from Mariner fans if you’re feeling down about your team. 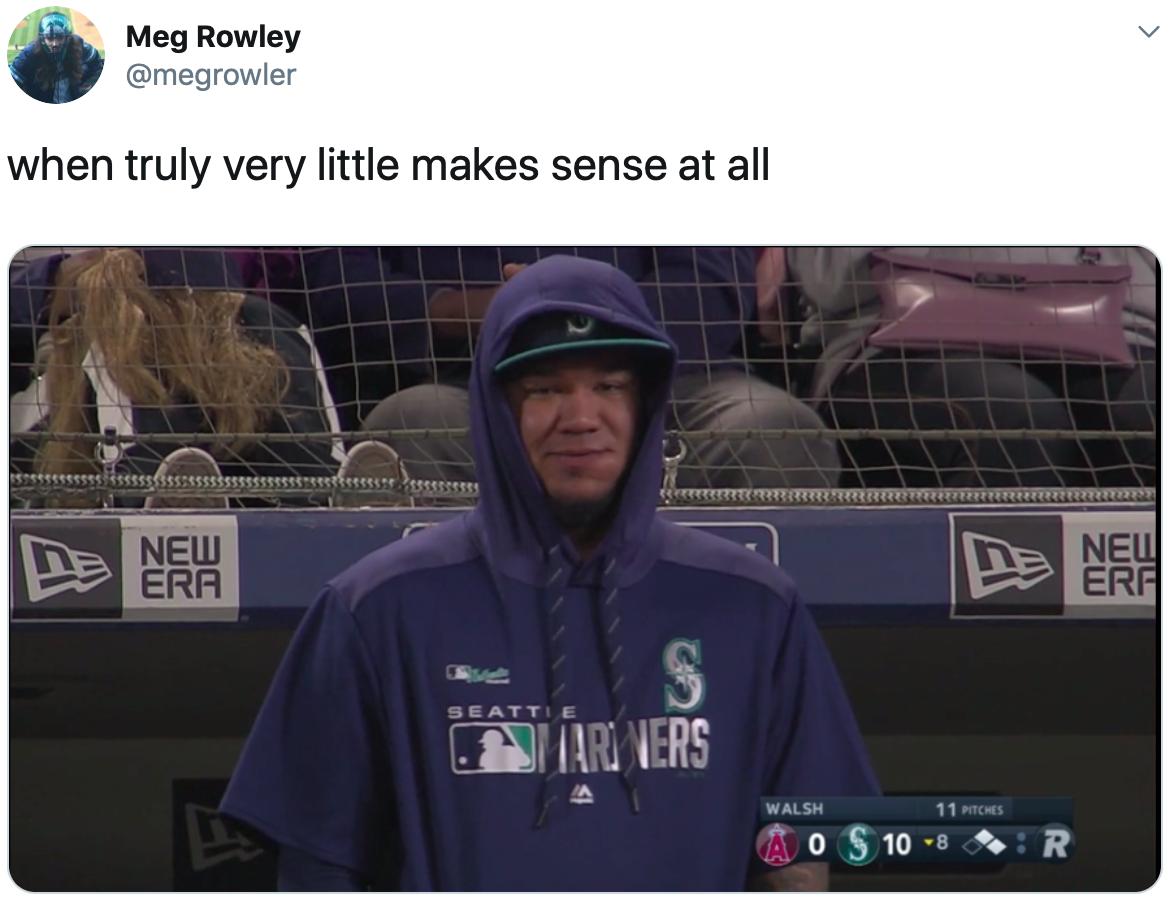 26) @DevanFink Devan Fink is an up and coming writer for Fangraphs. Tweets out a bunch of interesting stats.

27) @PitchingNinja Rob Friedman is the man behind the famed Pitching Ninja. A really cool page that covers nasty pitches and overlays pitching sequences so you can see how hard it is for MLB hitters to differentiate pitch types. This is definitely a must-follow. (Check out some of his work.)

28) @sammonroy Sam Monroy scout for proformance-advantage.com. He covers a ton of prospects.

29) @jasoncollette Jason Collette is a writer for Rotowire and ESPN. Covers a lot of odds and ends.

30) @MLBHR MLB Home Run Tracker. Pretty self explanatory here. Gives you an update of every MLB home run as they happen. Useful when a player you don’t usually pay attention to suddenly has like 26 bombs.

This list is just a fragment of what you can follow out there to gain an investing advantage. Most of these guys tweet about stats which can get repetitive; however, it’s useful and the more you follow, the more nuggets of information you’ll find.

One final note is this: if you follow anyone on this list, follow the prospect evaluators. They will have the most pertinent info to our hobby of collecting prospects. McDaniels, Longenhagen, and Norris have been especially useful to me in the past.

I hope you enjoyed this list of Twitter accounts I use in my day to day research. Stay tuned for the next installment of the series when I cover websites I use to gain information. 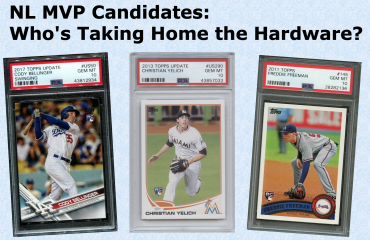 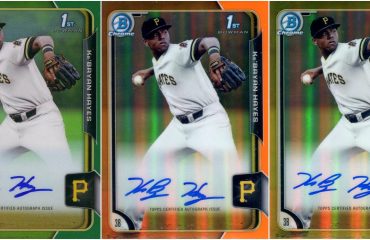