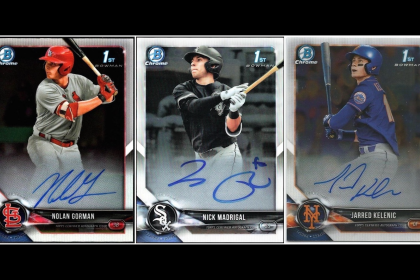 Today marks the first release of predictions, and what better day than the start of a new year.

My inbox on different platforms flooded with responses from yesterday’s post. Most were congratulating me on the start of this all. Some were asking questions. “How much is the subscription going to be? Will this skew the market?” In short, those can only be answered by how this is received by the Bowman Chrome community, and how advanced this model goes. But for now, let’s roll with this and see where it takes us.

*Reading the entire blog post is vital. It discusses flaws in the model and explains some of the values for certain players. Without that knowledge, you will not understand why some are low.

As you view the tables with the predictions and who is overvalued/undervalued, please keep in mind based on past data and variables, this is what they should be selling for. Sure, things like hype surrounding a particular player and buyer motive greatly influence the prices of some cards and is not accounted for in the model, but the goal was making the unpredictable, more predictable. I think this is a step in the right direction.

I know people will read this and think: “What the heck, my Jordyn Adams base autographs aren’t worth $32.46? That’s garbage.” Which will probably be followed up by an exit out of the blog.

Your cards can be worth what they are because buyers set the market, but they shouldn’t be worth that based off of the type of prospect they are (at this stage in their career). I think most of us can agree Jordyn Adams has added value by being a 4-star wide receiver commit to UNC before deciding on playing baseball, and his play to this point does not support his price tag.

I encourage anyone invested in Bowman Chrome or curious about it to create an account (it’s free!) to be able to comment on these blog posts. It will say you need to be approved, but I will approve you right away. I think it will be great to get some back and forth discussion between investors about the predictions and why some are predicted the way they are, or what their potential values could be compared to these predictions (useful for the next predicted value post).

This is the preliminary predictions with the model. Use this data as you wish. If you think it means you should sell a guy that is “overselling,” then do so but know this model comes with its weaknesses (described later).

The next blog will be predicting the March values of 2018 Bowman Draft hitters. I would imagine that will be a hit with people, as it has more investment interests. I will be doing a livestream on Instagram after it drops to give opinions and recommendations. You can set up @slabstox notifications on Instagram, so you don’t miss out. A date and time will be set for the livestream following the reveal.

Now to get into what you came here for. 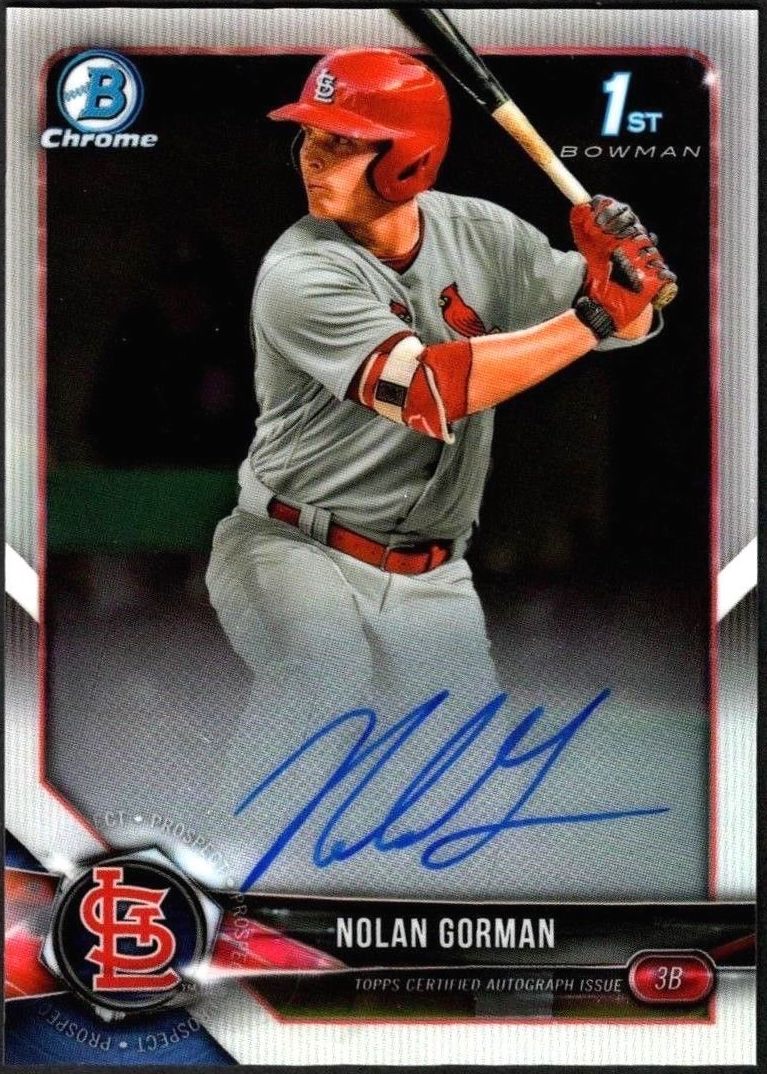 The first installment lands with 2018 Bowman Draft, a product released in December 2018. There will be two different table methods displayed. First is the largest percent change (positive to negative), and second is the highest valued prospects in the model.

After the tables, there will be explanations for some players. Be sure to read those, so you are not leaving here confused.

Variables like prospect rankings add a lot of value to players in the top 100 prospects. Players that land on the cusp of the top 100, or the cusp of certain ranges to determine more specific added value, are losing out on that possible value. More specifically, players who have not experienced a bump in prospect rankings (due to new rankings not being produced since the players were drafted and ranked) will be shorted value on their cards (see: Nolan Gorman).

The actual on the field statistics are from a small sample size. All 2018 MLB draftees had at most a half season of at-bats, leading to possible skewed averages. With that being said, all the data is relative and can be compared back to past draft classes, which reduces the error.

Market size is a factor, but the market size model I built needs to be perfected. Some teams could fall outside of a range they should be in, which could lead to plus-or-minus a couple dollars in value for a particular card.

Negative values are possible in this model and are not an error. Only three players have a negative value. For those players, the negative values essentially mean they are “worthless,” and based on their variables, should not be considered to be purchased.

The “Actual Value 12/31/2018” is based on the average of three days worth of sales at the end of the month. This is because sellers normally quoiting a three day average for current value.

The “SlabStox’s January Value” would be an average of all sales made of a particular player in January, trying to represent what the values would be throughout the month as you would be buying and selling them.

Both of these values do not include shipping cost you would pay if you were to purchase. 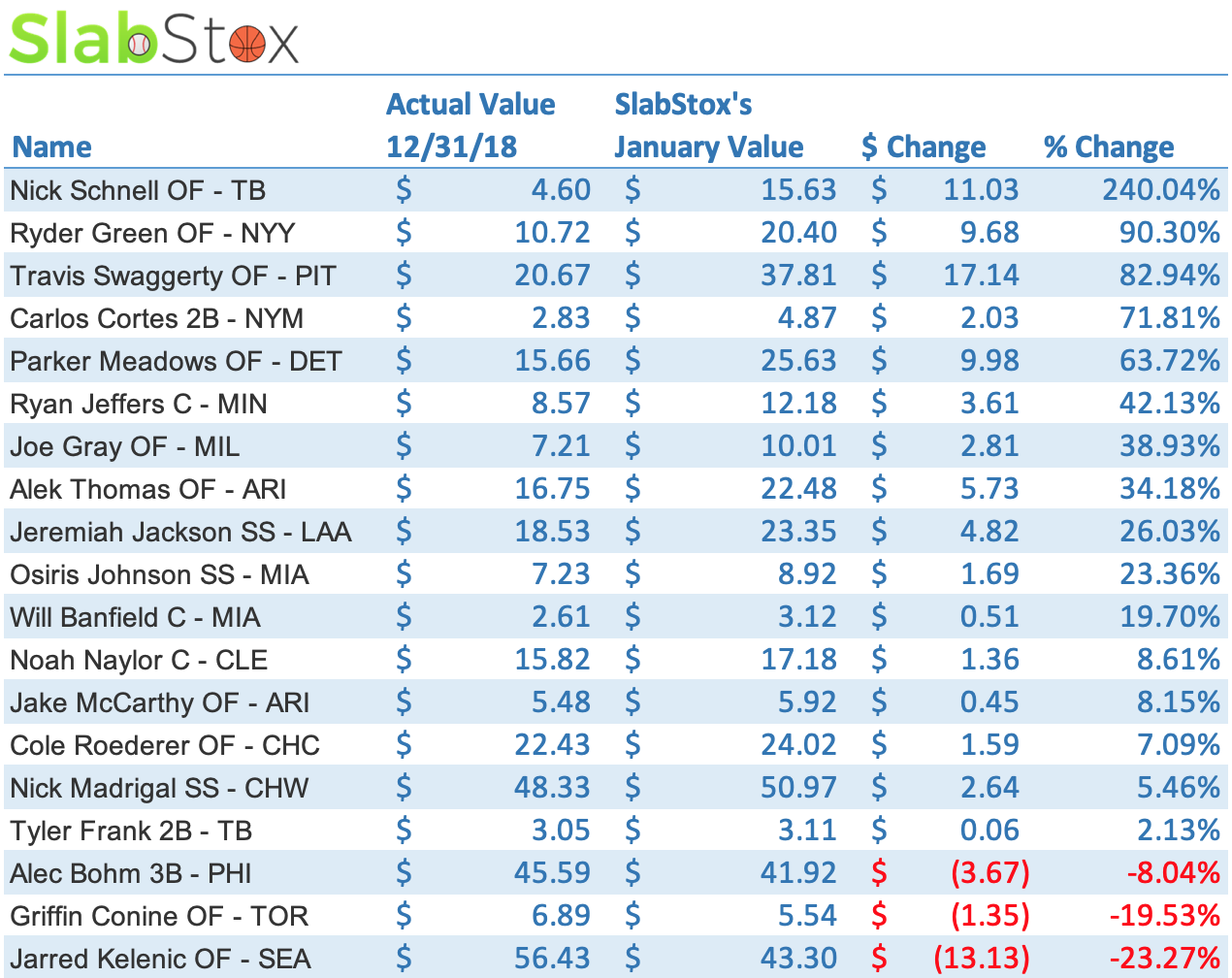 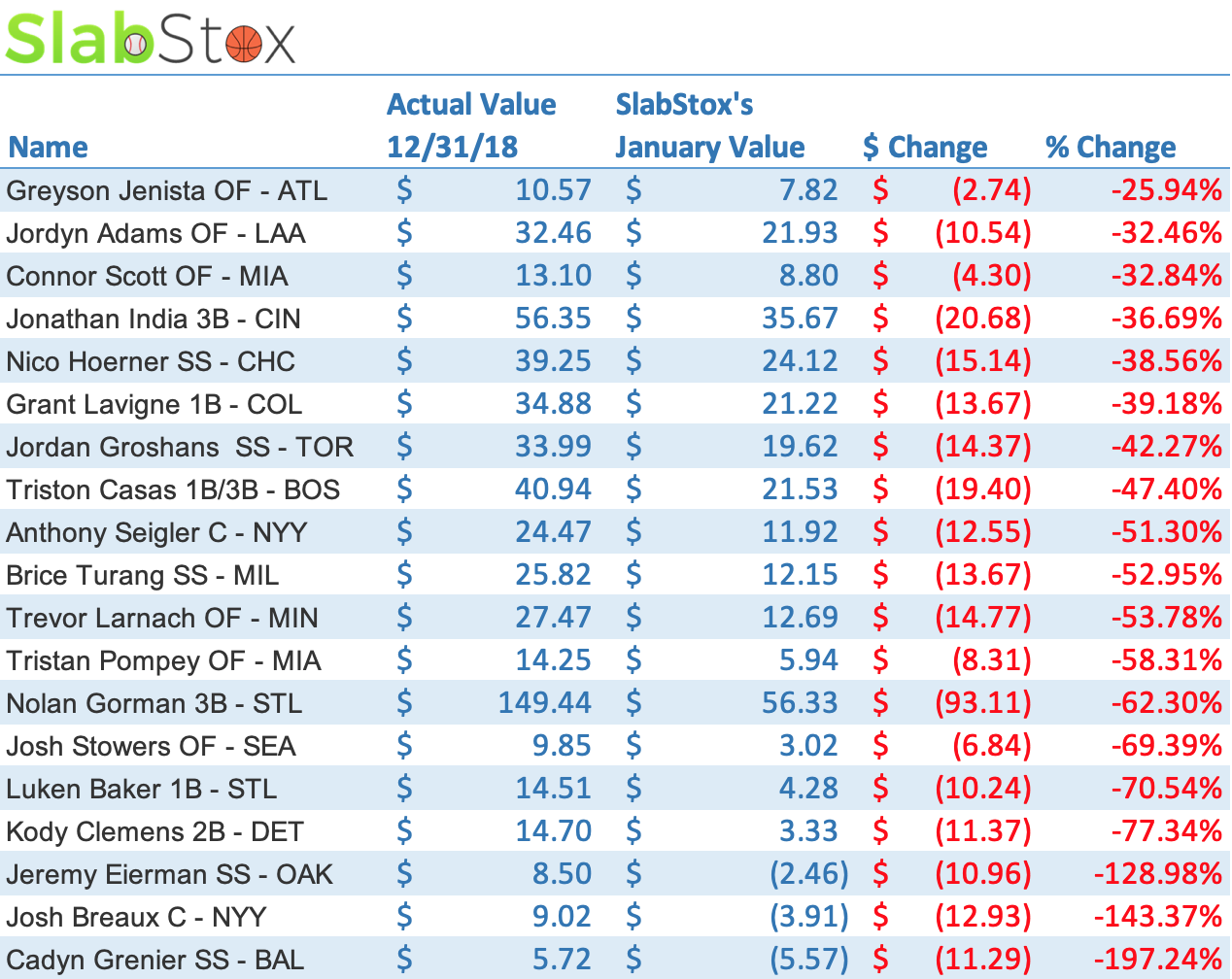 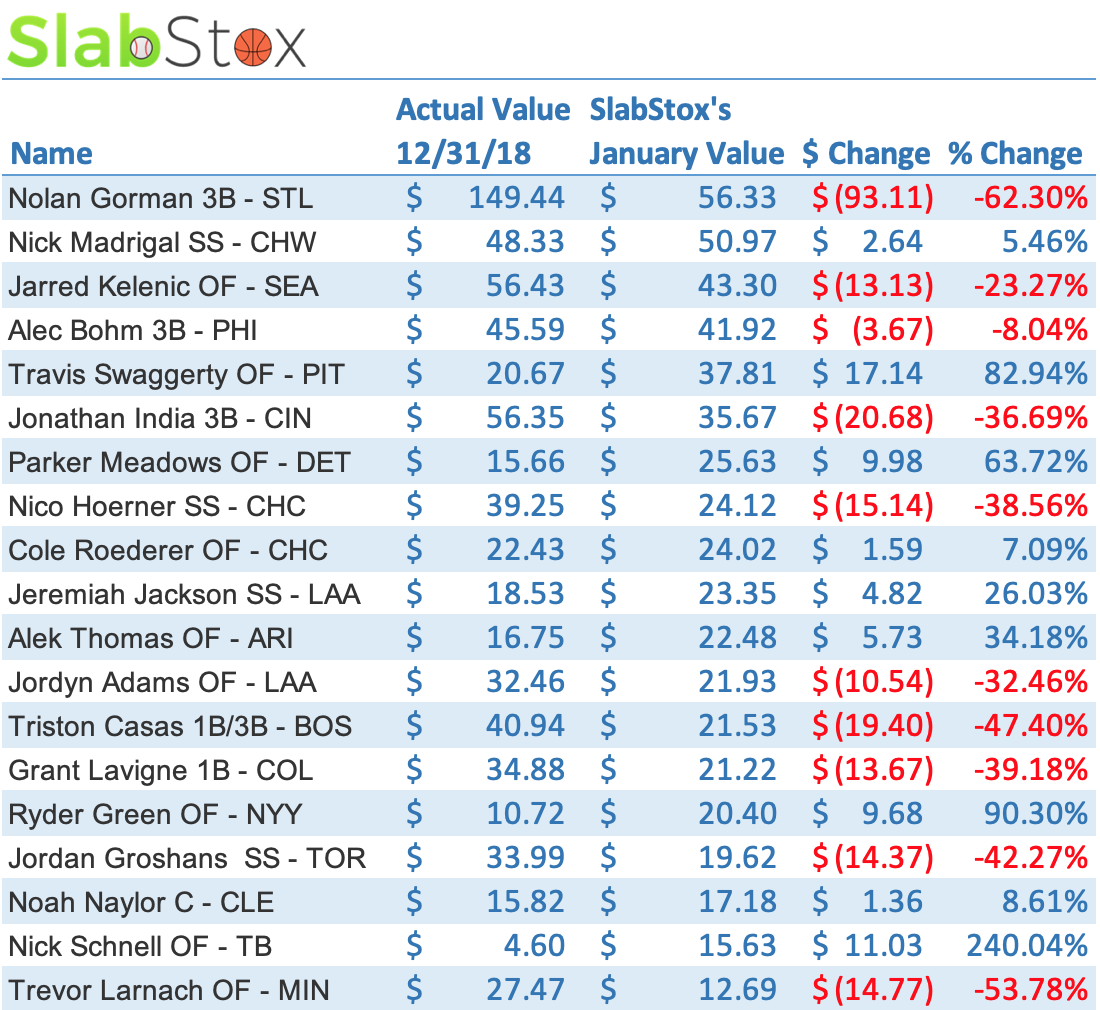 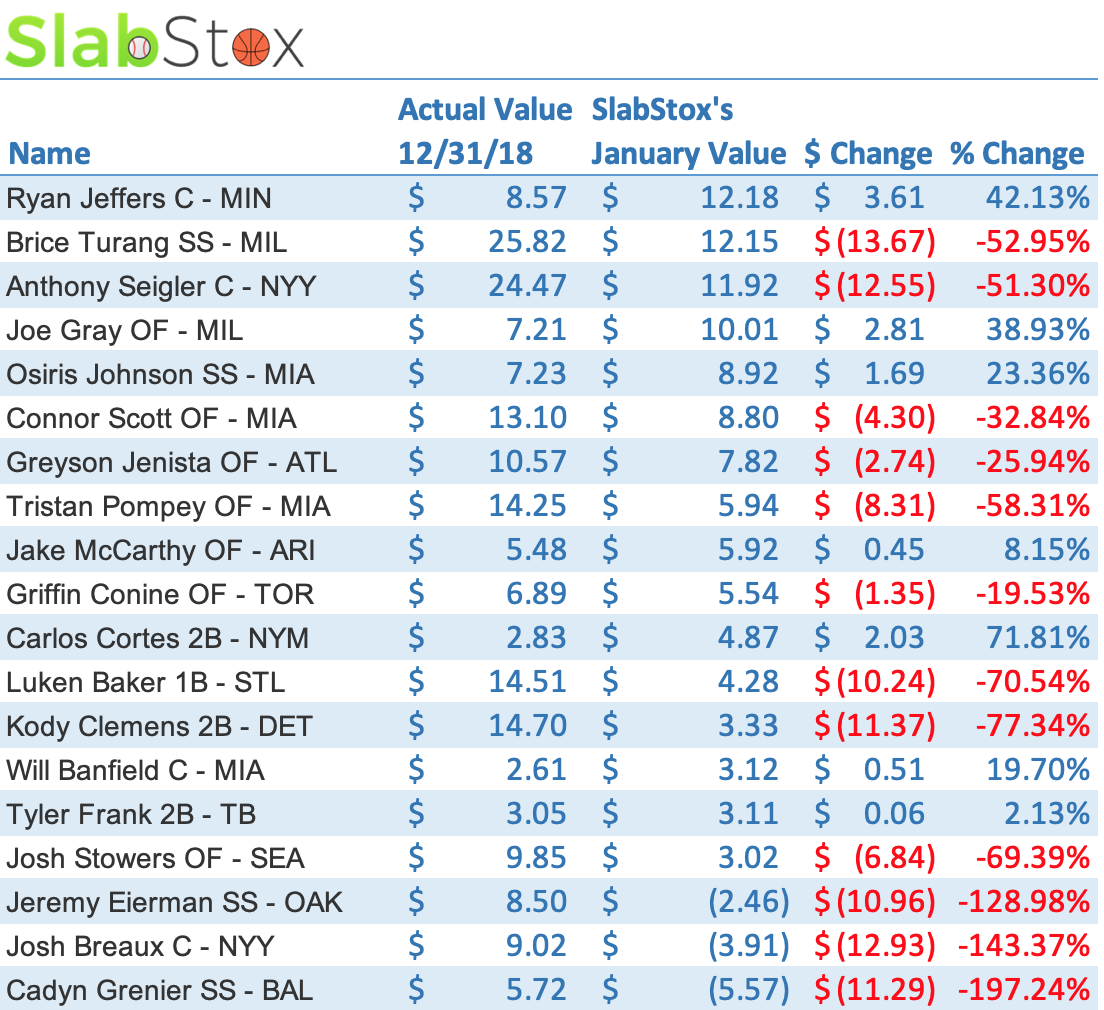 Nolan Gorman – Gorman falls into the “prospect rankings not updated, so he loses out on value” pool. If he were to be re-ranked where I believe he should be if new rankings came out today, his January predicted value would be $94, which makes more sense. I think it is still worth seeing even if he is top ranked, his cards are overselling.

Triston Casas – Casas had four at-bats, so essentially zero stats to be used in the prediction. Since he is one of the top selling prospects and didn’t want to omit him, I made estimates on stats he would produce in the half-season after he was drafted based on how similar prospects played. Therefore, his value could shift up or down, depending on how he actually would have performed.

Trevor Larnach – Larnach is a possible victim of barely missing a top 100 ranking. He performed very well, but has no added value from a top 100 ranking. I could easily see him at the back end of the rankings, giving him a predicted January value right at his actual December value. 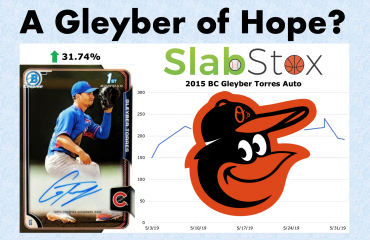 A Gleyber of Hope?