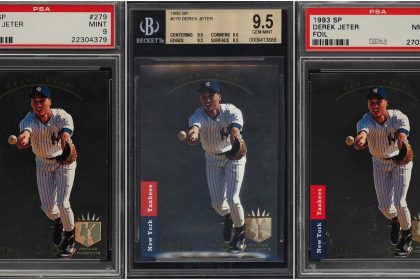 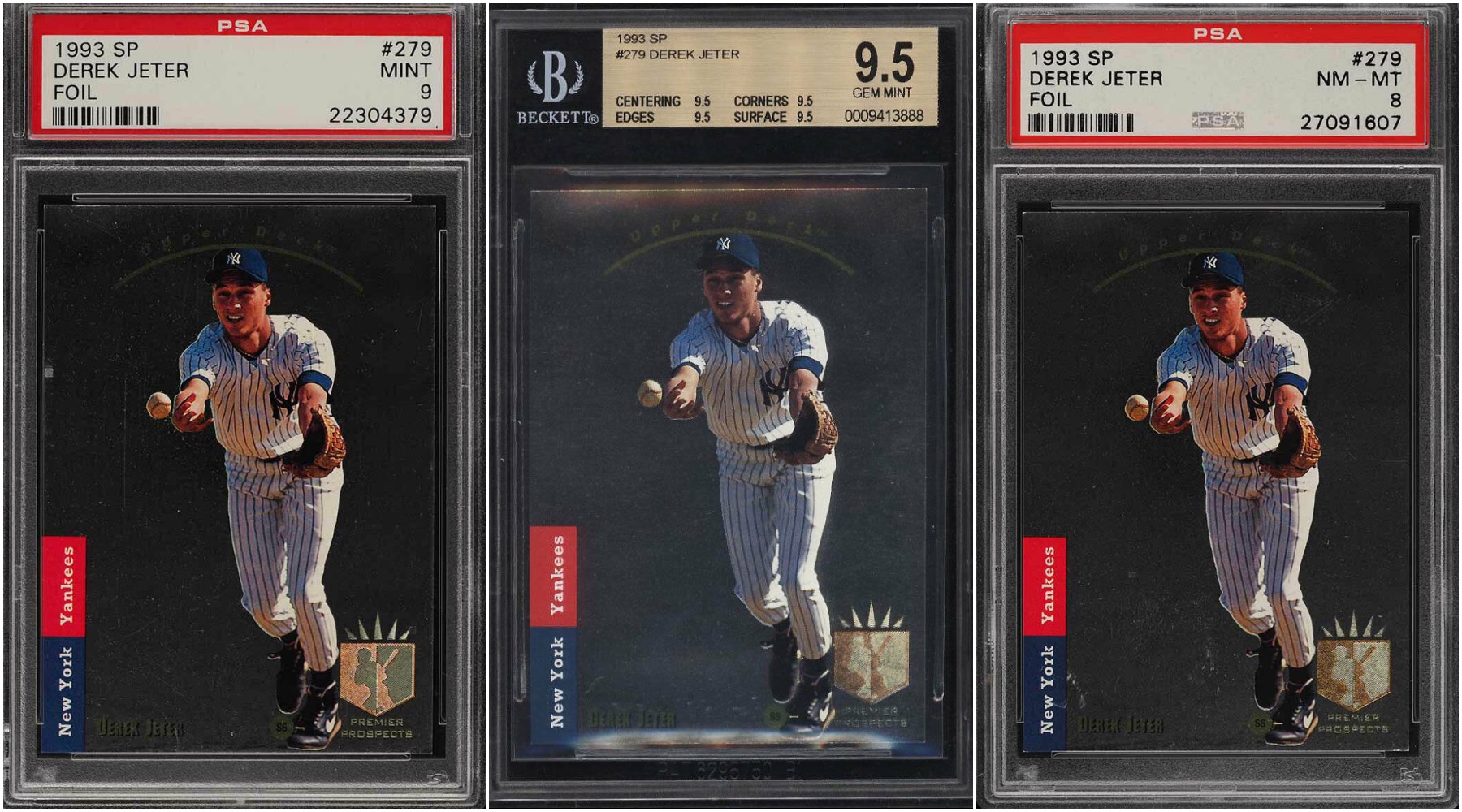 As many of you know, I am not connected to the baseball card market pre-2009. My specialty is this decade’s Bowman Chrome autos and Topps rookie cards. Outside of that, I don’t pay attention to too much else. Luckily, there have been a couple Instagram followers that have pointed me in the direction of a price explosion: SP Foil Jeter rookies. One of our writers (@psasportscards), was generous enough to collect all the sales data for this research, so a big thanks to him!

This has been a flaming hot topic for Hall of Fame rookie collectors since the start of 2019. Derek Jeter 1993 SP Foil rookie cards have been exploding, particularly the graded ones. These stayed steady for the entirety of 2018, but 2019 has been a different animal, particularly in March. This article will cover the population reports (and the percentage each grade is of the total population report) and price increase of the PSA 7, PSA 8, PSA 9, and BGS 9.5.

Through this research one thing is clear: the 1993 SP Foil is here to stay. 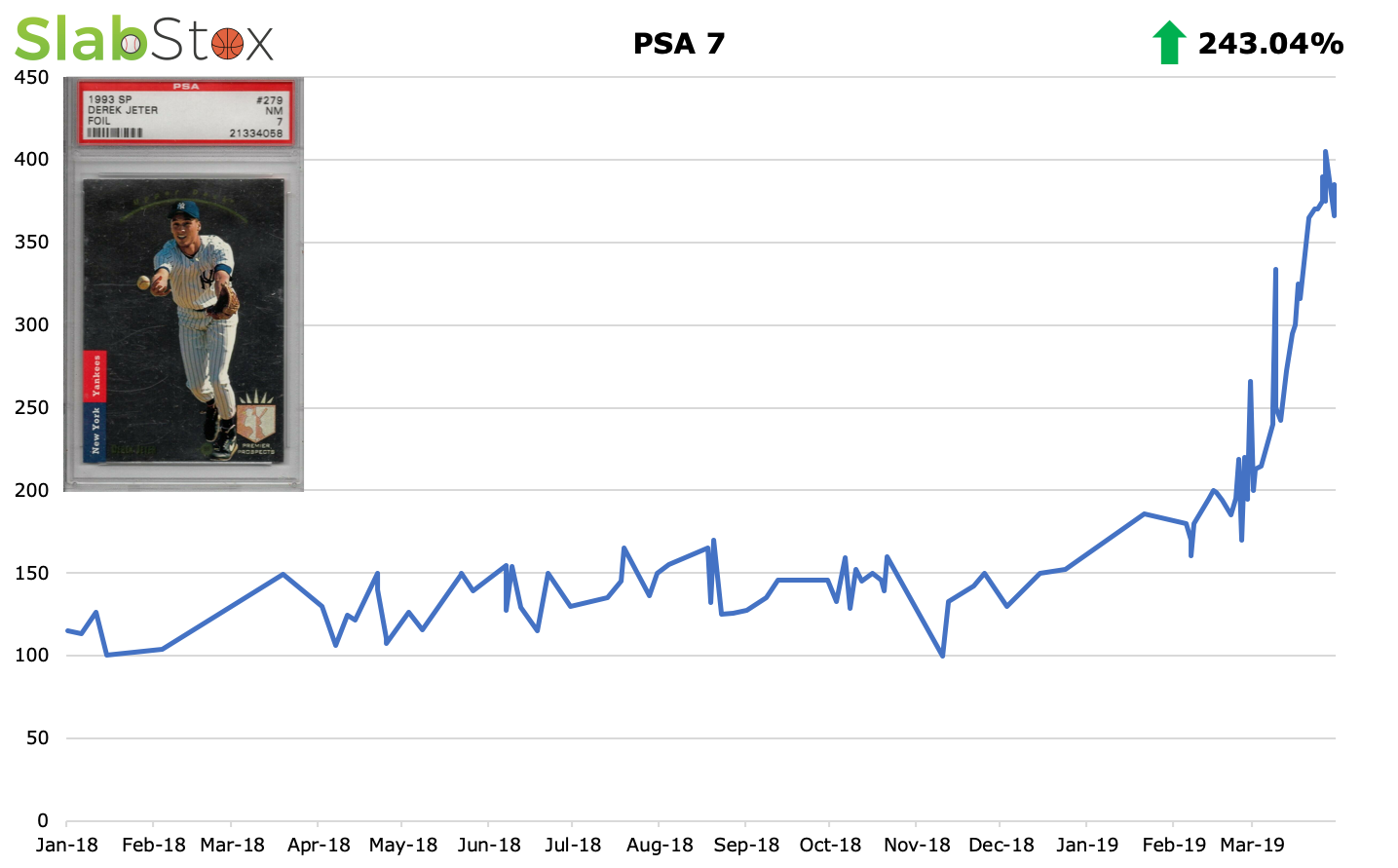 The PSA 7 holds the second largest share of the PSA population report for this particular card. Since the start of 2018, it also has increased the most out of any graded Jeter SP Foil. Since it is the cheapest alternative while still holding a relatively high grade (for a foil card from 1993), the demand has pushed the price to increase 243.04%.

Even though the graphs are displaying since 2018, these really have had the same increase since 2019 with the real price explosion coming at the start of March. 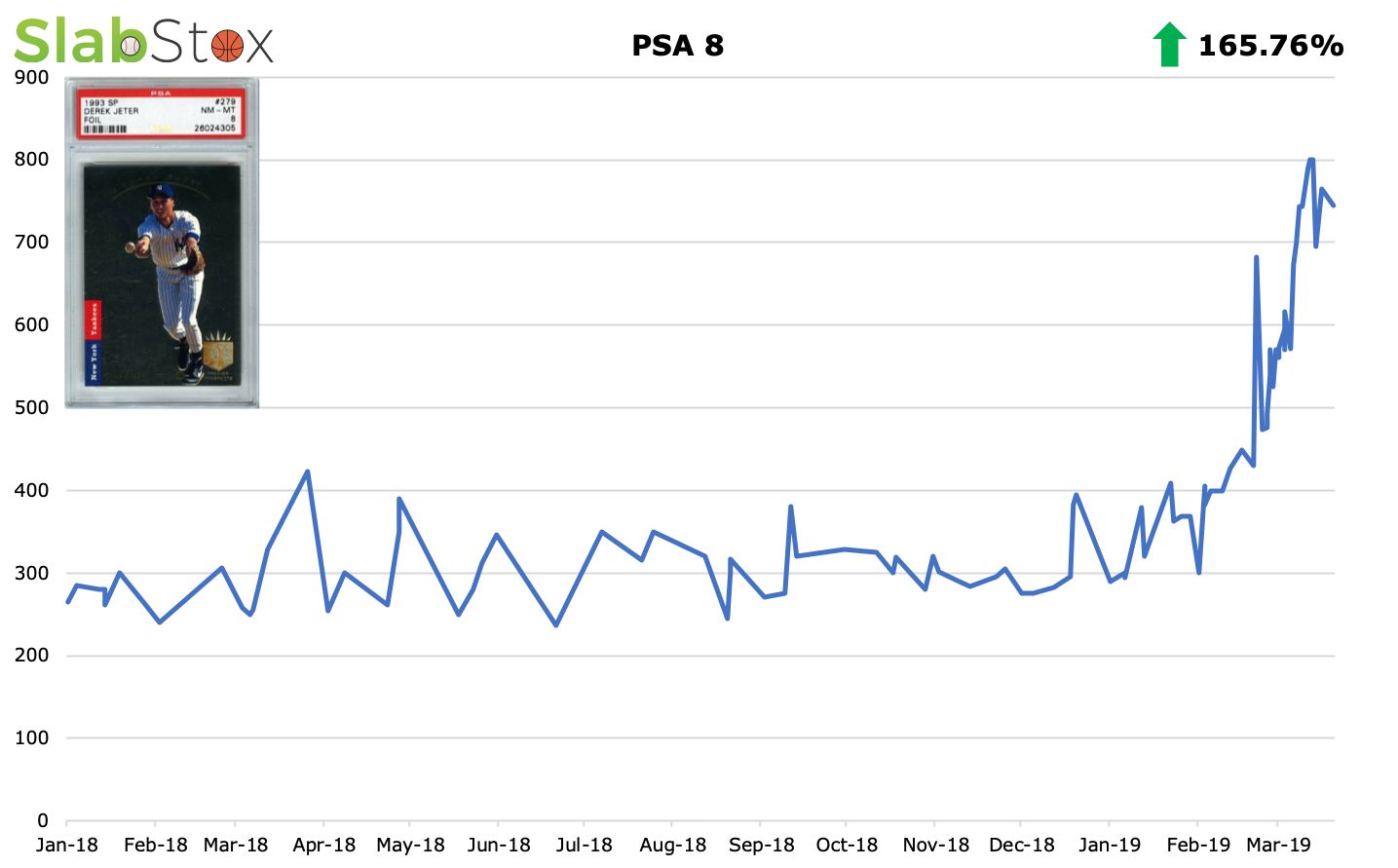 Next up is the PSA 8. The PSA 8 holds the largest share of the population at over 50%. Don’t get me wrong, a 165.76% price increase and total price increase is definitely great, but the large supply of the PSA 8 is making copies readily available, leading to a lower price increase.

Another contributing factor could be because it is more expensive than the PSA 7 less collectors have the ability to buy it, but it isn’t over $1,000 yet, so I don’t think that is as big of a factor. 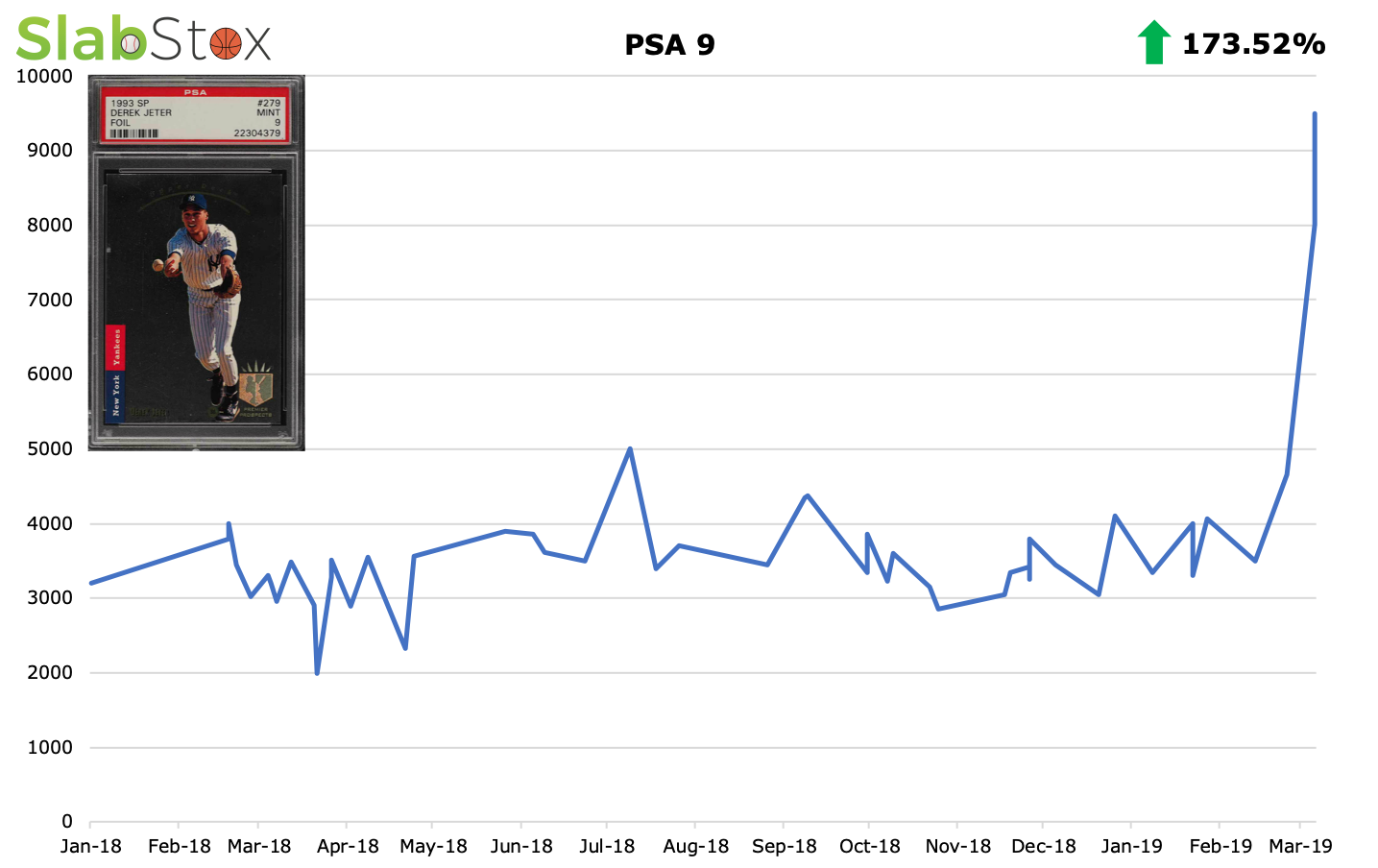 While these haven’t increased as fast as the PSA 7, the demand for the rare PSA 9 is in full force leading to a price tag of over $8,000 now.

The true comparison comes between the BGS 9.5 and the PSA 9. 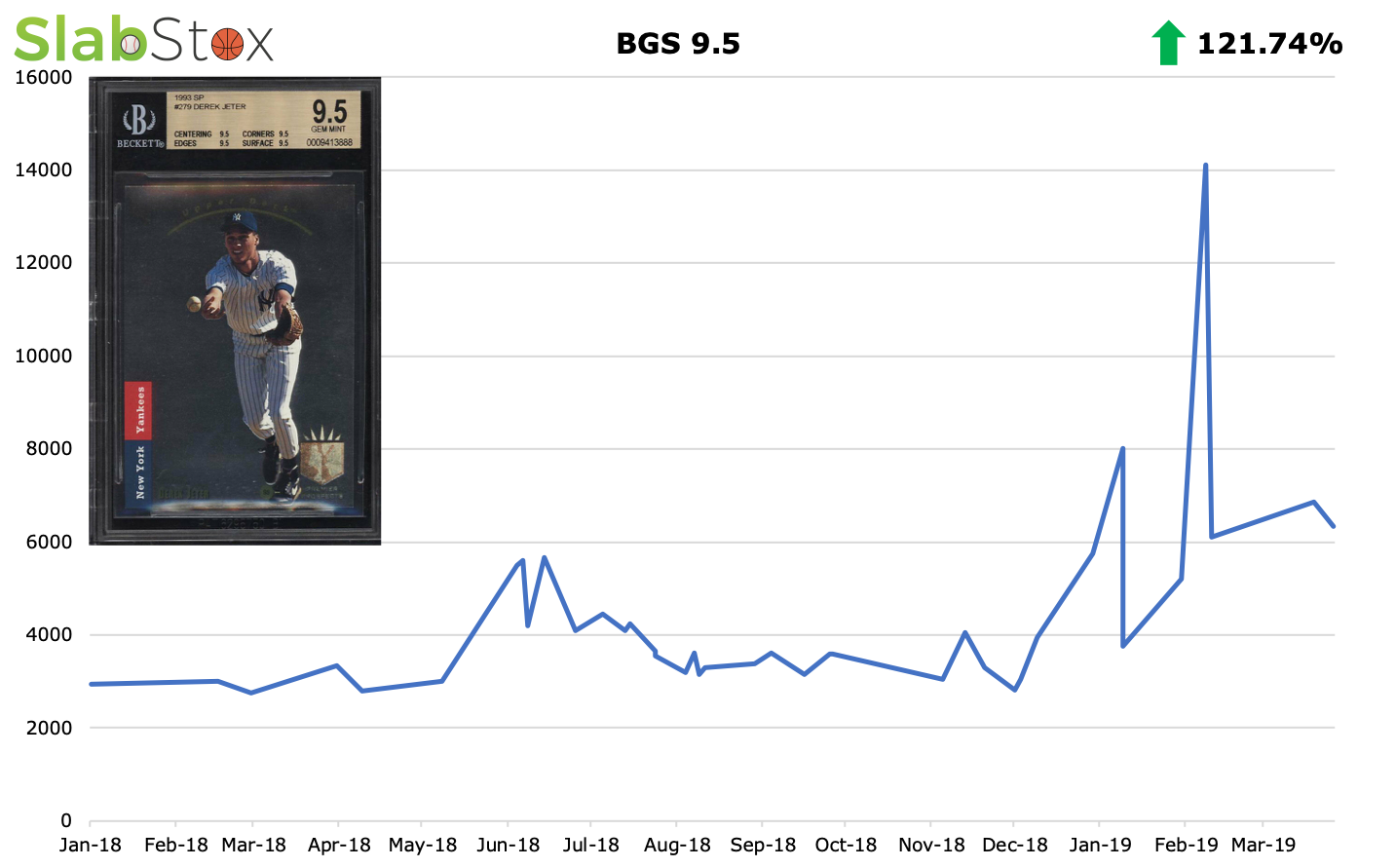 From January to February, the True-Gem sales increased 75.92%.

Honestly, I’m not the best source to go to for this information since I deal in post-2009, but I’d say the PSA. PSA has the vintage lineage for grading sports cards, and not to mention they have already taken over as the higher value cards between BGS and PSA for Gem Mints (either a BGS 9.5 or PSA 10).

However, the True-Gem 9.5s will most likely always have the premium over the PSA 9.

Will these continue on a similar trajectory in the future?

I doubt the major price spikes will continue to happen through the rest of 2019; however, when it comes to Jeter getting inducted into the Hall of Fame, there is no reason why these will not keep going up (unless there is a price bubble burst on these before that).

I am not the most educated on this card, as I haven’t tracked it for a long period of time or know the nuances that go into grading one of them, but I do know these have exploded in price and are extremely popular.

If you’re a Jeter fan, you may want to get one of these sooner rather than later.

Do you have plans to grab one before his Hall of Fame induction? 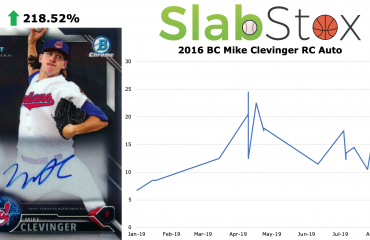