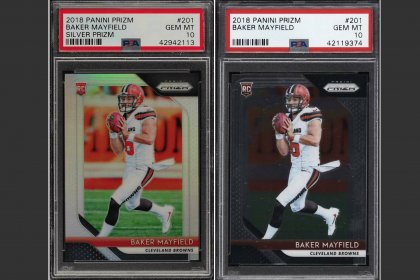 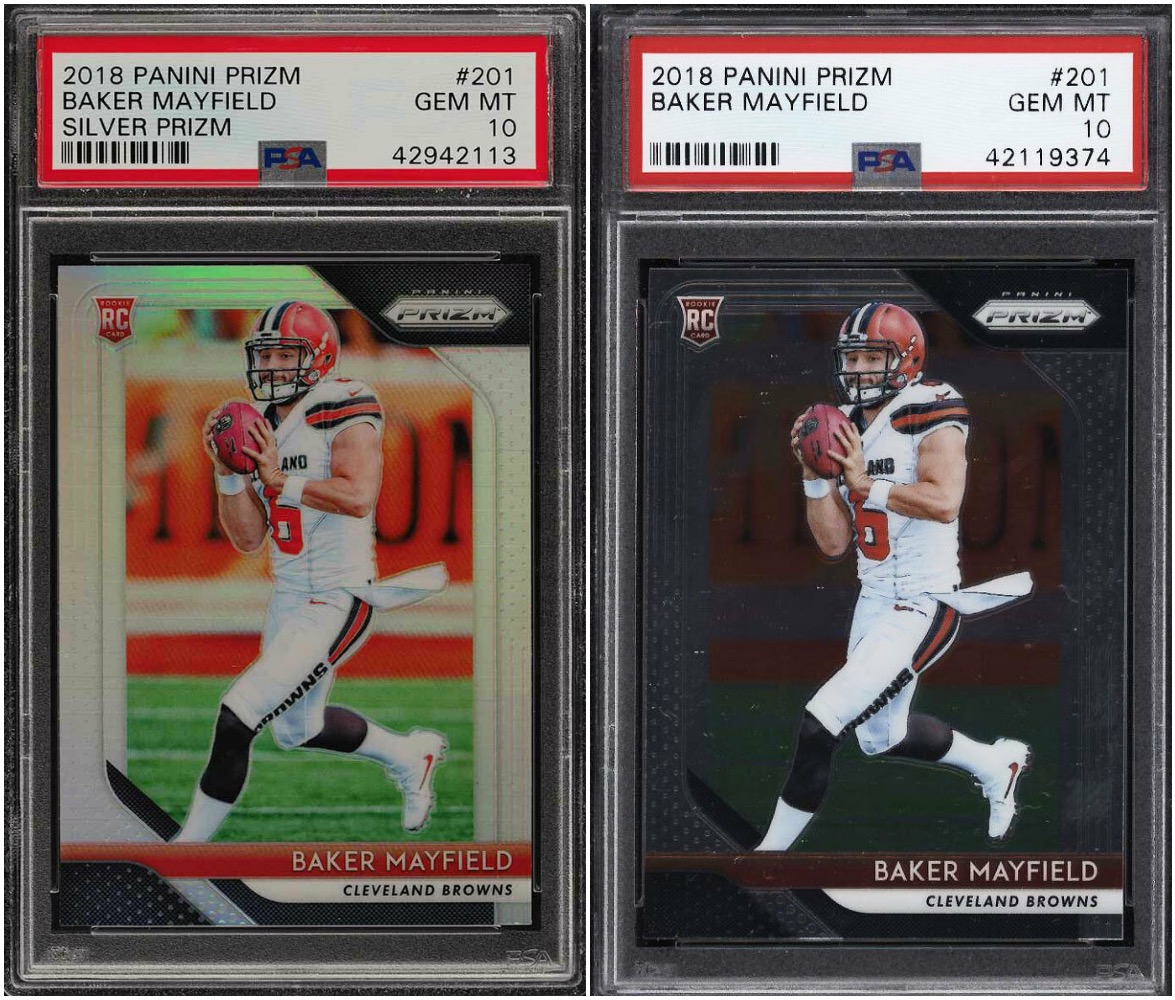 The hobby doesn’t always have to be about Contenders autos eclipsing $1,000 or five figure NT RPAs. There is always a way to invest at an affordable rate for up-and-coming stars. In this year’s Prizm, there are many options for Base rookies of stars that can be had for just a couple bucks.

This week, we will be looking at the difference in prices between the Baker Mayfield Base rookie and the Silver rookie from 2018 Panini Prizm Football. There will be a breakdown for each card and the PSA 10 version of it. With these boxes currently pushing $225, you’re much better off buying singles than testing your luck on a box. 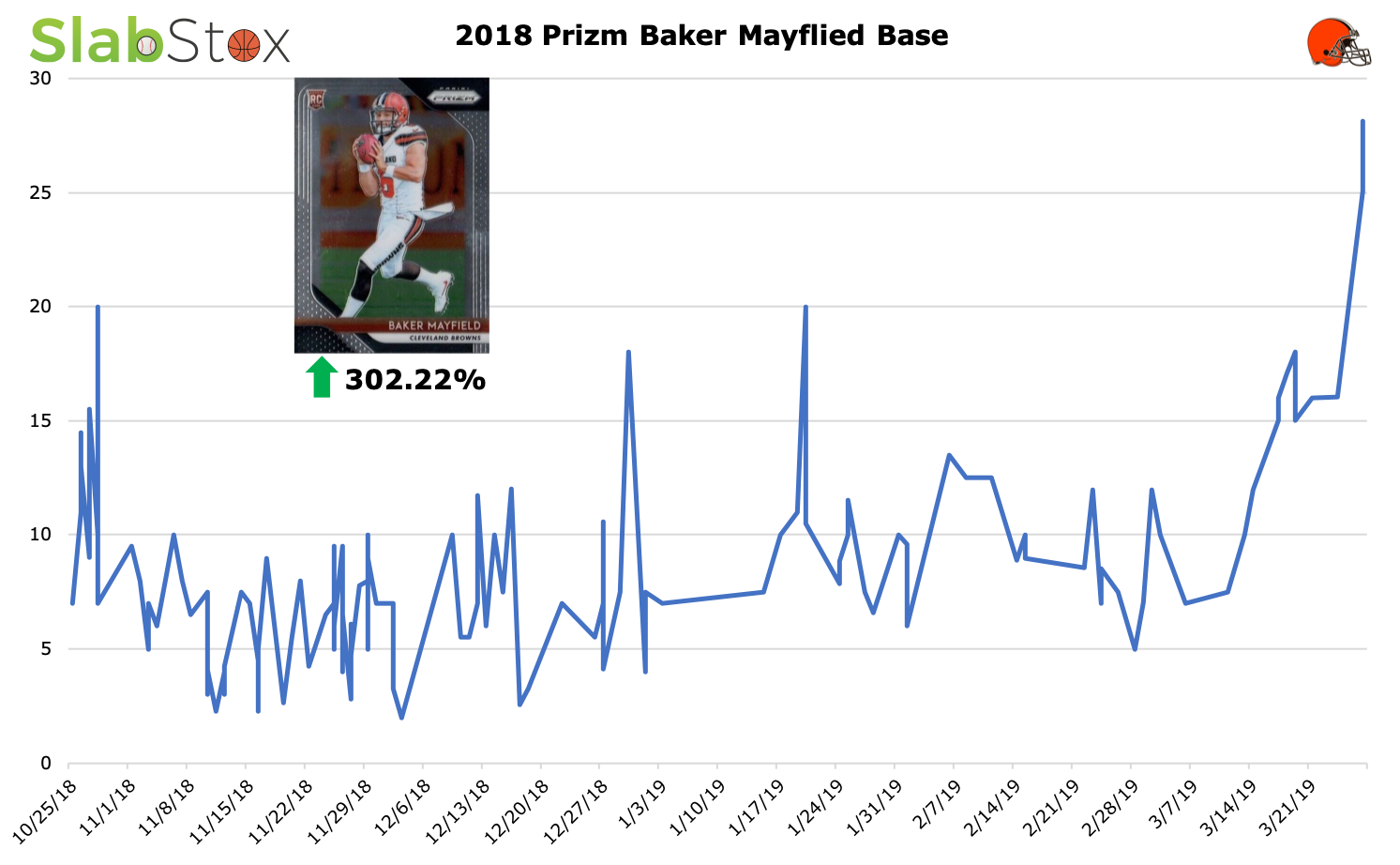 The Baker base rookie started out hot its first two weeks, averaging $9.99. After the first few weeks, the average price had a drop of over 25% to $7.29. During the next three months before NFL free agency, there were plenty of Base rookies to be found for under $5. Although they weren’t included in the data, there were plenty of Base Baker lots sold on eBay for great value. Future graders were scooping them up.

Since the start of March, the Base has seen a little jump of over 6 dollars. Through the month of March, they are averaging $15.18. Recently, they are trending over $25. 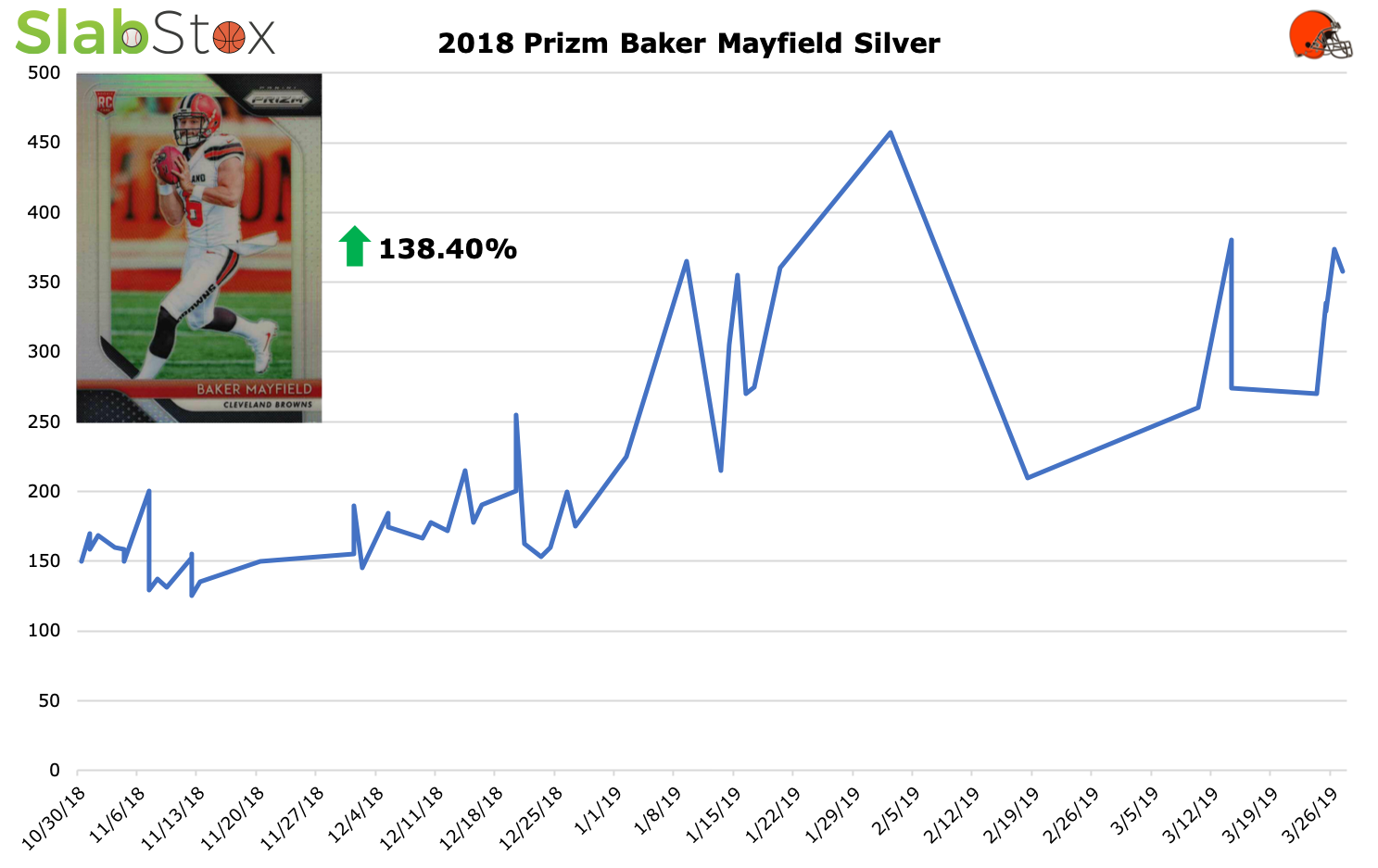 During the first two weeks of the Prizm release, the average Silver sold at $155.80 (11 copies sold). Now, that seems like an absolute bargain. The Silvers kept on rising throughout the season as Baker and Browns continued to improve. Even after the season, his price continued to jump. From the middle of November to the last day of the NFL season, his average Silver sold at $174.86. During the entire season, there wasn’t one silver that sold for more than the price of a hobby box.

After the season the Silver prices shot up over 40% to an average price of $307.42. Most buyers tend to think the offseason is a good time to pick up cards for investments; however, this year seems to be totally different. The hype surrounding Baker plus the Browns free agency (and trade for OBJ) has really shot his prices up.

The best way to add value to a rookie card, Base or Silver, is to submit it to PSA and try to snag a Gem Mint 10. 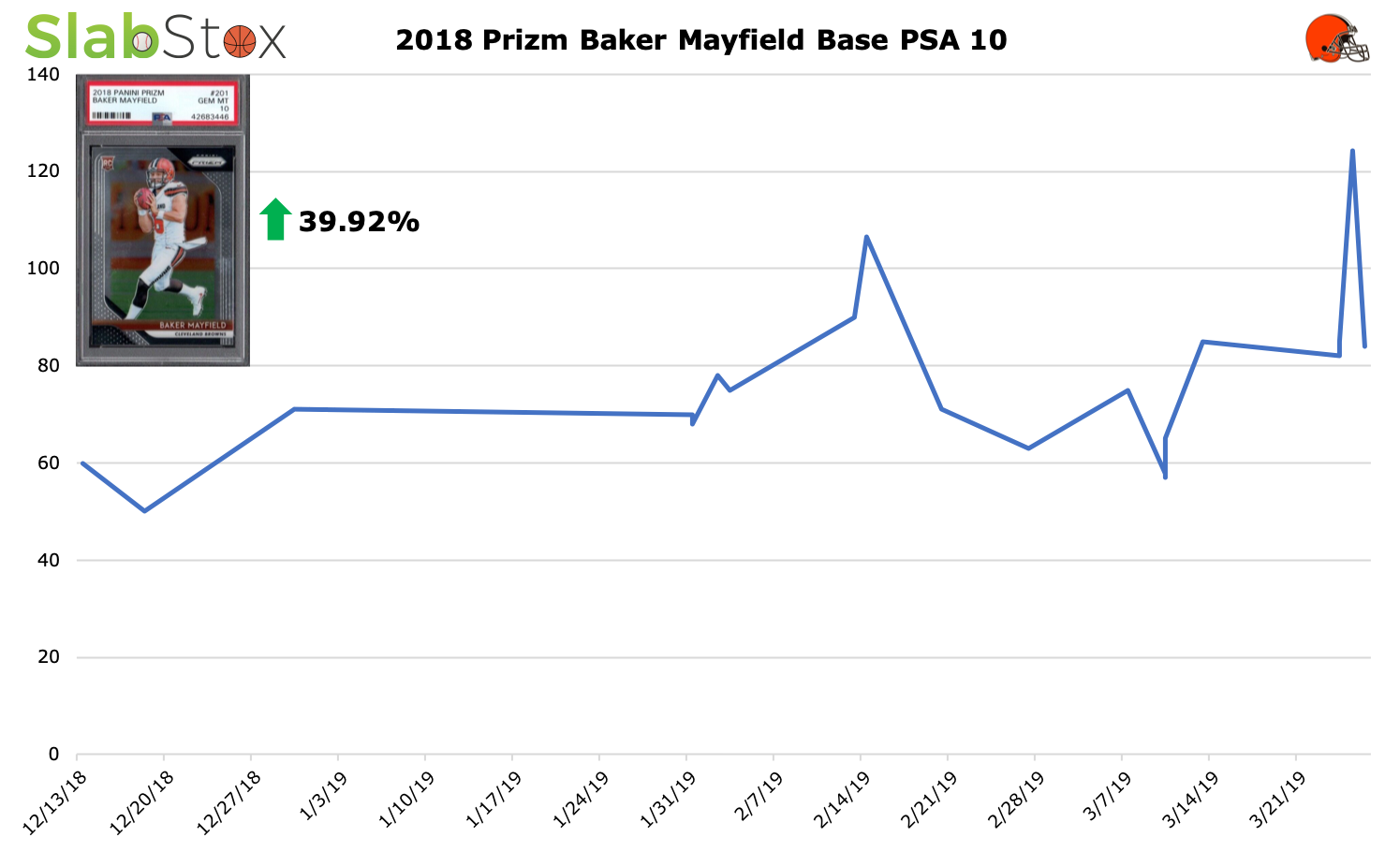 I think the Base PSA 10 is a smart investment with upside. Even though the market gets flooded with more of this card as more get graded, the price continues on a slow, upward trend. When thinking about submitting your ungraded for grading, you have to make sure the copies being submitted have good centering and a clean surface. Analyzing the current pop report should also help with your decision. The Base rookie has 138 copies submitted with 83 Gem Mint 10s and mostly the rest being 9s. 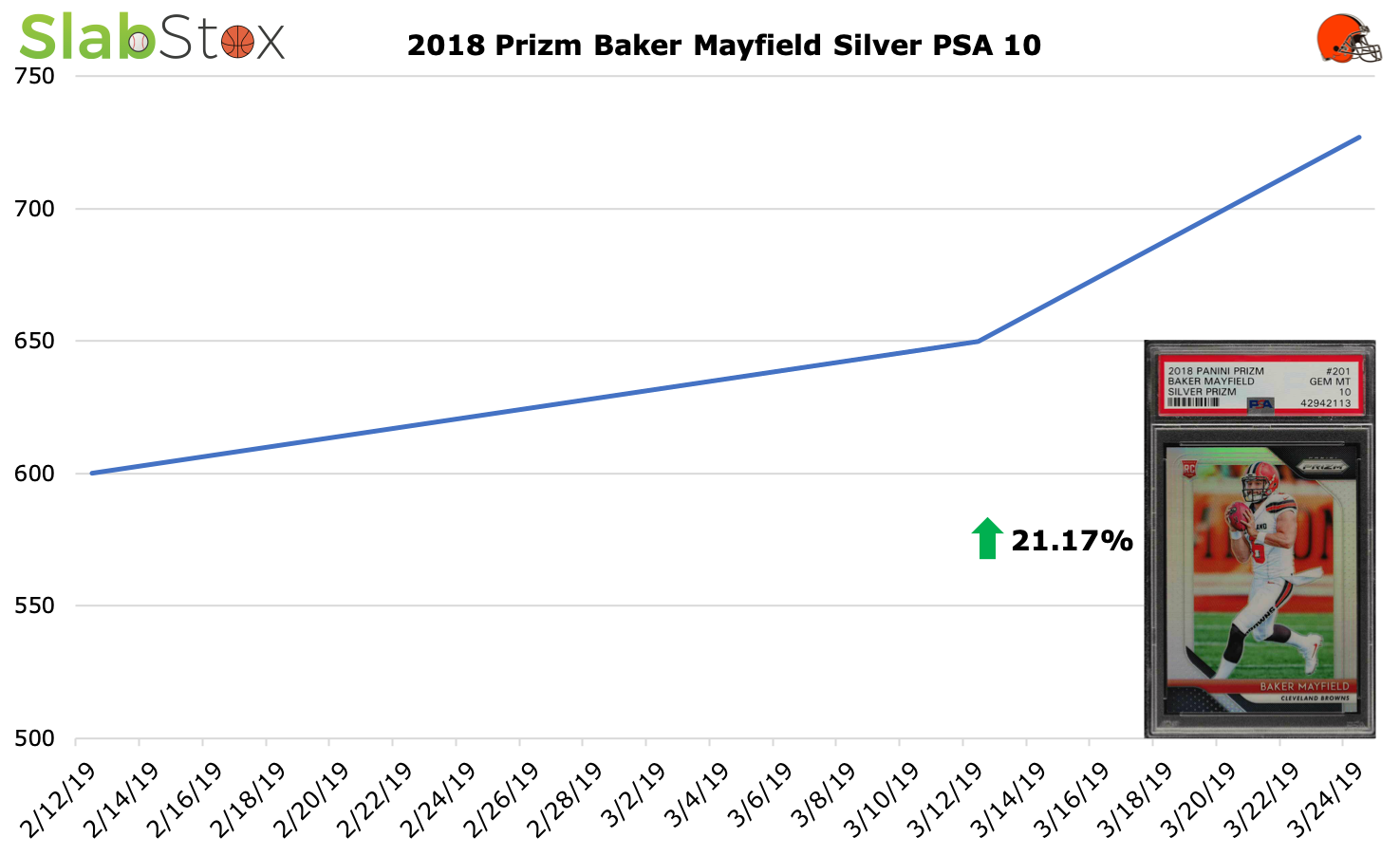 The Baker Silver PSA 10 has only three sales, and each one has sold for more than the last. I definitely expect this trend to continue throughout the offseason. While the population report indicates these are much more short printed than their basketball counterparts this year, it is still crazy to see an NFL Prizm Silver sell for more. However, supply and demand are a big factor in that.

Market Scoop On Baker: I believe the real value in buying a Baker Prizm rookie right now would be buying multiple Base and submitting them to PSA. When looking at the current PSA pop report, the distribution of 10s is greater with the Base than the Silvers. For the Base rookie, 60.14% have graded at a 10.

Translated Into a Baker Investment Strategy: Let’s say you buy 10 Base rookies at an average price of $25 and spend $15 on each to grade, equaling a $400 investment.

For those wanting to roll the dice on a larger profit margin, the Silver may be for you.

Your call. Either way, my gut says Baker continues to rise.

What’s your projection? What will Baker Base 10s and Silvers sell for going into Kickoff Weekend? 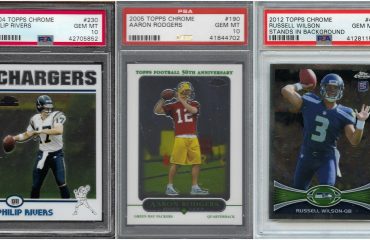