Baseball is back (Spring Training at least), and so is #StoxTrends!

Last season, I started a daily schedule revealing a “#StoxTrends” consisting of different top trenders. Each day was dedicated to a specific MiLB level or the MLB. It was a big hit, so I look forward to taking it to the next level.

This season, StoxBlog is up and running, so it will provide more possibilities to report on the increases (or decreases) of Bowman Chrome autos. I will also be providing investment outlook for each player, which I hope you find valuable.

I asked my Instagram followers who they thought were the high performing prospects of Week 1, so I will sprinkle their suggestions in with some of my personal choices.

While Spring Training started over a week ago, this weekend marks the end of the first full week of games. For the purposes of the article, the first three days of statistics will be included as well, and all price comparisons will start from 2/13 to today.

What is there even to say anymore? The guy is a BEAST.

I can’t figure out what I think about Tatis as an investment still. I believe he is a better investment than Vlad Jr. and Eloy (based on bat/power combined with premium position, also buy in cost), but I still think it is a great time to sell if you can secure profits.

I see Tatis being one of the best future power short stops in the game, so I think it is up to you if you want to lay $300 on the line for a Tatis investment.

The once highly touted 2016 1st round pick is finally getting it going like people expected after putting his knee injury behind him.

For someone whose base autos once sold for around $60, $30 doesn’t seem like too bad of a deal. Of course, the hype is around him right now with his two home runs this week, but if he sees a cool down this upcoming week, I’d say it may be worth picking one up.

In 2016 he had a home plate collision, which resulted in a terrible knee injury. Now, he is feeling great, and his performance is improving. He is 23 already, so he will have to start to kick it into gear and show prolonged success to find a spot with the M’s.

There is no better word to describe Chavis’ professional career than inconsistent. All through the minors, he has been inconsistent either with his AVG, OBP, or even his PED suspension.

When I am looking to invest in someone, I want to know what I am getting. Other than a guy that launches bombs, I am not really sure what I am getting in Chavis. He has hovered between 20 to 25 percent for a K-rate, and has been around 7 to 9 percent for a BB-rate. Honestly, the 80-game suspension is tainting my view of him more so than anything. He hit a ton of home runs in 2017, but they come with an asterisk.

He could break through with the Red Sox and see some AB here and there, but I wouldn’t bank $43 on a guy that got hit with a PED suspension and hasn’t shown consistency with getting on-base.

The former top prospect and current MLB player that has been filled with hype since 2013 is producing this spring.

What better way to make people believe once again, than to launch three bombs in a week. Buxton base autos rarely pop up and sell on eBay, so if you wanted to invest at this point, you’d probably have to look elsewhere.

While Buxton always had the potential to be a perennial All-Star, I am not sure if it will happen like investors from day-one are hoping for. He is playing down in Florida with a nice climate. When Opening Day comes, he will be back in the cold of Minnesota, and it will make it much more difficult for the ball to fly.

Even if this is the year for Buxton, I don’t see him getting it going in the regular season until June. If you want to join the Buxton believers, I would wait until April to buy, as I think they will be lower than $95 a base.

More like what didn’t he do? An underestimated prospect (even to Nate and I), went off in Week 1.

In Nate’s Pt. 2 on first baseman, he talked about how there isn’t much to gain with Thaiss at $2.50 a base auto. Boy, were we wrong. The most recent base auto auction shot up to $20.

I’m looking at this situation similar to the Eric Thames explosion two seasons ago. While Thames was not a prospect and he did it in the regular season, his autos exploded for a month. If Thaiss keeps this up, of course his cards have room to grow. However, his production this spring is unsustainable over the long haul, and unless you time a flip perfectly, it appears hard to see more gains.

Clearly, we were wrong about them at $2.50 a base auto. I may be wrong saying not to buy at $20 a base auto, but that’s prospecting. There aren’t too many people that could have predicted his explosion this spring; otherwise, they would not have been $2.50. 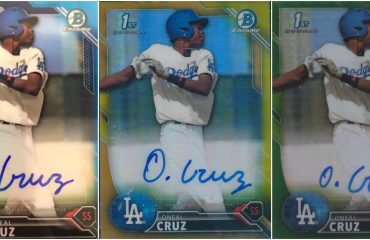 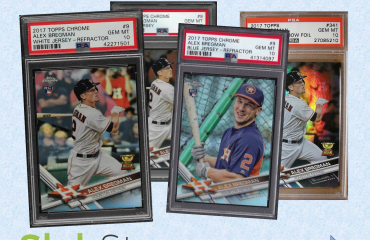