This week’s edition arrives a day late (apologies), since I was on vacation since last week Thursday. Because of that, be sure to ignore Sunday’s sales (if you check eBay often) when reading this article, as Sunday will be included in next week’s #StoxTrends.

If this is your first week reading a #StoxTrends, read the first couple short paragraphs of Week 2 describing the data collection, statistics, and how the percent increases are calculated.

This week had a ton of top performers ranging from young MLB studs, to repeats from last week, to a pitcher I’ve never heard of, but only five had big enough price increases to land on the list. There will be a few honorable mentions at the end that had big weeks, but their prices didn’t increase enough (or at all) to make it in as a graph.

Before hopping into the article, I had someone suggest Nate and I should be disclosing our position on each player in every article we write. Nate has been doing that in his Prospect Profiles, but I will start to include that in each article I write, as well. Any of our loyal followers who have been reading our articles since the beginning know we never try to prop up any market we are invested in, as whenever I write about someone I have investments in, I state it.

Normally, we won’t even write on them. The players I am most invested in (regardless if still buying them, or looking to sell them off), have never been written on exclusively. Sure, Luzardo and Whitley made last week’s #StoxTrends, but data supported their placement on it. I even went out of the way to disclose my investment in each, and I let everyone know they should form their own opinion on the two if they don’t want to hear what someone heavily invested has to say on them.

Most of everything we write on we have no investment interest, and we do it to help educate our viewers and readers (or at least give them some thoughts to build an opinion off of).

With that being said, we don’t own a single auto of any of these players. If you want to include these as “investments,” I pulled a couple 1st refractor non-autos of some of these guys out of packs, but those are in a cardboard box and are worth minimal value. But, I haven’t straight up invested in any of these guys.

This week, he got five more at-bats, and added two more hits. It was enough to keep people believing in him and to have his cards keep rising.

By no surprise, it was announced he won’t be on the 2019 Opening Day roster, but it will be fun to track him as he starts his first full season of professional baseball.

For Week 2, I wrote this under Hoerner’s investment outlook:

“After this week, Nico base autos are grabbing around $50. We like Nico a lot as an advanced college bat, but the only time he has played so far was in the Arizona Fall League and the couple spring games. Much like Ian Anderson, keep a close eye on Nico Hoerner as full-season ball starts.

If he starts to consistently put up good numbers, they will probably be around $70 by that time. You may pay $20 more, but at least you know the small sample size is not a fluke, and your risk is mitigated.”

I still believe they will settle between $60 to $70 in the first month of the MiLB season, but if he keeps this up, they could stay at $90.

I really like Nico; however, I am not going to go into FOMO (fear of missing out) mode yet. I would still like to see him play a month or two in A or AA ball (whichever the Cubs put him in), and see his production with a bigger sample size. There are always a lot of big performers in Spring Training, but not all of them keep it up going into the regular season. It works oppositely too. I read this morning that in 2018, Mookie Betts went 0 for 18 in Spring Training, and we all know how that one ended (2018 AL MVP).

Don’t put too much stock into Spring Training stats, but for the guys destroying it at a young age, assess what type of risk you want. If you want a risky investment that could pay off in a big way, then go ahead and load up on guys like Hoerner and Pache. The reason Nate and I have been against investing in them is because of the risk that comes with a big price tag for not knowing exactly what they will give us. However, it is up to you the risk you want in your investments.

Keep a close watch on Hoerner and buy accordingly.

After being the chase player in 2017 Bowman Chrome when the product was released, he struggled through 2018 which ended with an injury placing him on the 60-day injured list.

Now, he is fully healthy and ripping the cover off the ball again like 2017. The Orioles just optioned him back to AAA to start the season, but I’d imagine after a little more development there, he’ll be back up in Baltimore.

As for an investment, he definitely could play a big role in the MLB and put up nice numbers. Personally, I don’t like investing in Orioles players; however, if there is one to invest in, it’d be Hays in my mind (with Yusniel Diaz being a close second). He has put up a ton of production in his career so far, and if he fully adjusts to MLB pitching, he could be a great big league player.

His cards are still cheaper than when they released in 2017, so it could still be a buying opportunity. I like to invest in A to AA players instead of brink MLB starters, so I won’t be buying any Hays. But for anyone that likes buying guys before they hit their regular MLB duties, I could see Hays being a worthy investment.

I’ll be the first to admit, I’ve never heard of Darwinzon Hernandez until @newenglandpieces on Instagram suggested him to me for this week’s list. With that being said, he’s actually had a great Spring Training. That’s a bad look for me, since he’s the Red Sox #4 prospect. Looks like I learn something new every day!

Moving onto the outlook, I heard this year he could possibly be used out of the bull-pen for the Red Sox, but at 22-years-old, they want to keep him on a starter trajectory.

At this point, the Red Sox and their fans are dying to see a pitching prospect work out. He’s got a plus-plus fastball combined with three other average pitches, which gives him a full arsenal, even if they aren’t all above average.

The real problem with him is his command. It’s graded out at a 40, and last year he had a 5.35 BB/9. That’s bad. He will have to key in on his command to become a viable starting pitcher since his non-fastball pitches aren’t above average.

At right around $15 a base auto, I would wait until the MiLB season starts to buy if you want in. He’s had a great spring so he’s in the spotlight for the Red Sox right now. Once the quick rush dies down, they could settle back around $10. Is that worth betting on his command getting better? That is a question you have to ask yourself before investing.

For the second straight week, Alonso lands on the list. This week, the price explosion was four times what it was last week after bringing his spring numbers to .347 AVG, 4 HR, 9 RBI, and a 1.058 OPS. Oddly enough, that is worse than they were last week (.423 AVG, 3 HR, 1.349 OPS), and that fourth home run occurred on Sunday, which is outside of this week’s window.

I couldn’t put my finger on why they went up, but @sportscardman on Instagram gave some analysis as to why they increased with a week lacking performance:

“Seems like people that bought in bulk of him just drove up the price of him. He didn’t do anything drastic last week to go up $80. So people drove up his prices and people [are] just over-reacting now and overpaying.”

To me, this seems to be on point since it is not like he hit two home runs this week or anything.

Last week, this was my investment outlook:

“While he definitely has the potential to eclipse $100 if he dominates out of the gate in the big leagues (or even continues this through spring), I still find it tough to invest $100 into a first baseman. If he doesn’t consistently produce at the highest level (Freeman, Rizzo range), I can’t see him staying up there. With that being said, if anyone is going to hang up with the big boys, it is going to be Alonso. It could definitely happen; he could produce enough to pass $100. Personally, the probability isn’t high enough to drop a Benjamin on him.”

Congrats if you snagged one for $90 and are quick flipping at $160!

I did state they could surpass $100 if he kept producing, but I wouldn’t have wanted to risk that for a quick one-week flip. For the risky gamblers out there, it paid off with over a 50% increase.

After writing on Alonso for a third time now, I don’t have a place to say invest or not to invest, mostly because he is surpassing all expectations of where I thought they’d top out at. I’m not going to be buying, but if you think he’ll be a .300 AVG hitter with a ton of bombs, then more power to you.

I am kicking myself for not pulling the trigger on a bunch of these for $50 like I was planning on. Bichette and Kieboom are my two biggest misses over the last couple weeks for guys I was meaning to buy into (I lost four Bichette eBay auctions two weeks ago). Now, I am left empty handed.

Kieboom base autos are now touching $75 regularly, with a couple going over $80. Hopefully, he under performs through the first couple months of the MiLB season, so I can scoop a couple up around $55 to $60. Otherwise, it may be worth grabbing one at $75. He’s got serious pop in that bat for a short stop, and he is still on 21.

Whenever he reaches the majors, I am anticipating he takes Dozier’s spot at second base, since Turner has short stop locked down. Because of that, he won’t have the premium position (shortstop) going for him, but he’ll have a ton of power coming out of second base with the flexibility to play at short. I like Kieboom a lot, and I hope I can snag one soon.

These are guys that didn’t have a change in price, but have been putting up some unreal numbers this spring. I’m expecting this week there will be a correction in value, and we will see some increases.

Another thing to be said is for the MLB players, their ungraded base autos don’t sell enough to see increases very often. It would be a better indicator to look at either BGS 9.5 or PSA 10 sales for them, which I will start to do in the future.

Will any of these players make Week 4?

One week closer to Opening Day!

Next on SlabStox: A Big Announcement 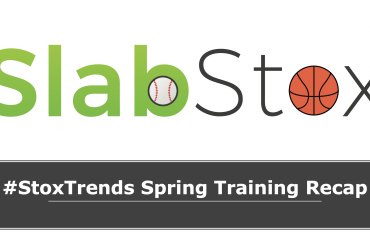 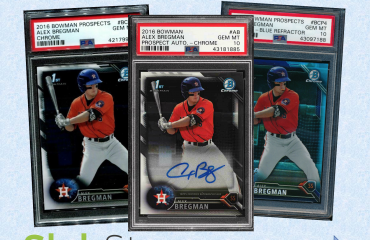