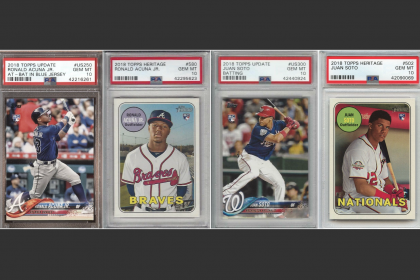 Many of my followers probably assume the only cards I invest in are Bowman Chrome autos, which would make sense judging by my profile and the articles I write. However, if you were to compare quantity of cards in my investment, I have as many rookie cards as I do Bowman Chrome autos.

Going into the 2019 MLB season, one of the biggest questions is if Ronald Acuña Jr. and Juan Soto will continue their success into their sophomore campaigns. An even bigger question for rookie investors is if you should buy their Topps Heritage High Number or Topps Update PSA 10 rookies?

For starters, we need to look at how many different rookie cards are available for each player (or main options, ex. Update, Heritage, Topps Chrome, S1/S2, Chrome Update, etc).

Acuña had his MLB debut in late-April, while Soto’s came in mid-May. At this point, the next product to come out with either of these two rookies was 2018 Topps Series 2. Acuña made it in as an SP (no base rookie), and Soto missed it completely.

While it is understandable the small gap could have caused production problems, it is unknown to me why Soto did not even make it into 2018 Topps Chrome, which was released August 1st. Because of this, Acuña naturally has a lot more rookies on the market than Soto, making it hard for collectors and investors to make a clear choice.

For the sake of this research, I will be taking a look at their Topps Update Base RC PSA 10 and Heritage High Number Base RC PSA 10. There are a lot of other factors that go into choosing an investment piece (like short prints and parallels) but for a clear comparison, let’s focus on rookie cards they both have.

Before looking at Heritage or Update and Acuña or Soto, the current prices must be analyzed. 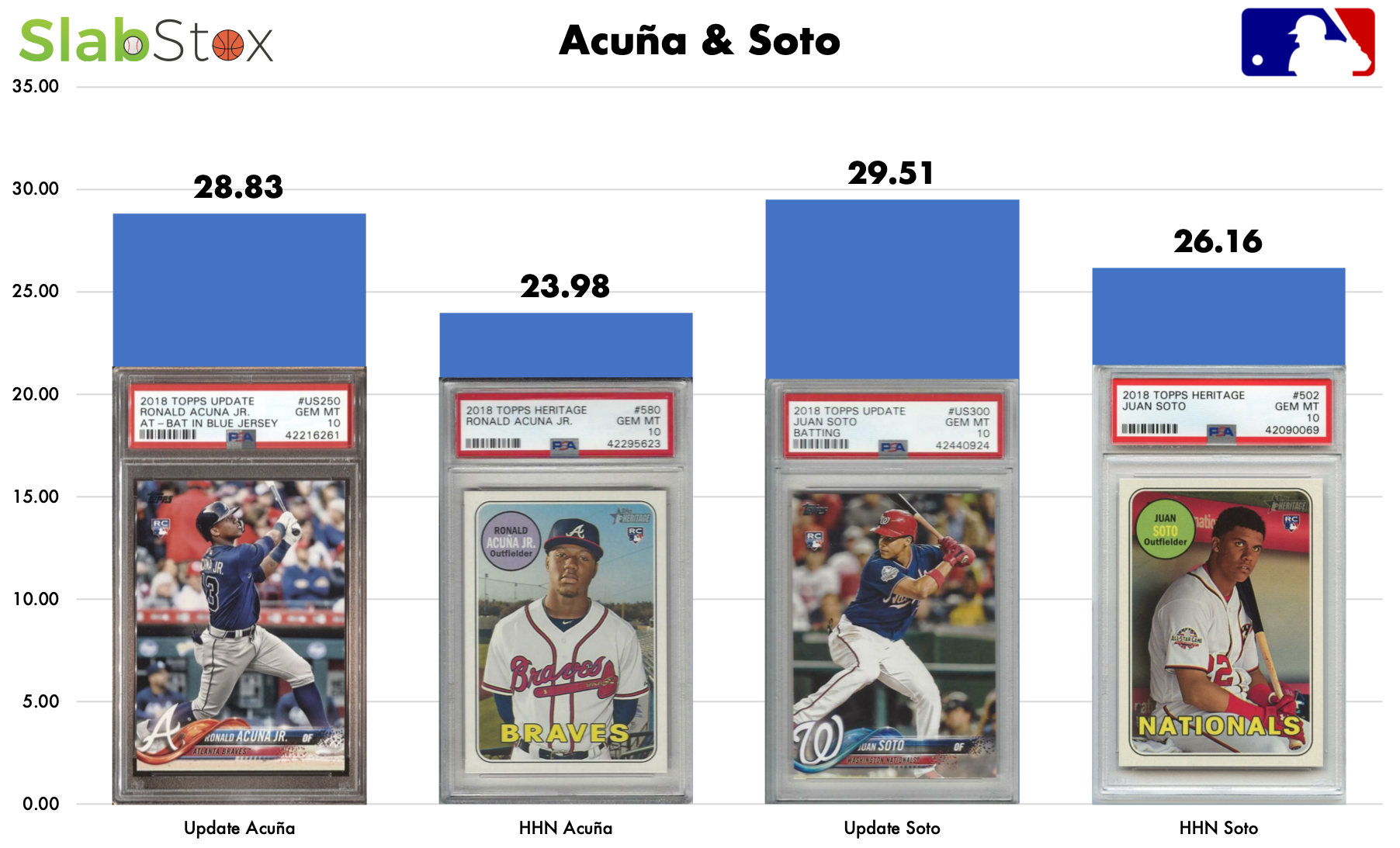 Over the past two weeks of auction sales, Update Soto PSA 10 is the highest of the four at $29.51; Acuña is not far behind at $28.83. The same goes for Heritage, with Soto barely outselling Acuña. Instead of making the price difference about their performance, I believe it is due to the lack of 2018 Soto rookies (since Acuña did win ROY).

Why is Update outselling Heritage?

While a lot of people think Update will always outsell Heritage, it is fair to say it depends on the player. For a lot of MLB stars, it has to do with availability and collector preference. Mookie Betts’ Heritage RC was an SP (due to it being box set only), and a PSA 10 outsells his Update RC PSA 10.

In the case of 2018 Update and Heritage, the price difference is based on production and population report (the amount of cards graded PSA 10).

It is common belief HHN was produced in mass quantities this year, and the PSA Population Report would suggest the same. Plus, a lot of collectors prefer Update as an investment piece or a way to get their favorite rookies (as you will see later).

Acuña and Soto both have around 45% less Update PSA 10s than Heritage PSA 10s, which supports the higher prices for Update (more scarce).

*Edit: HHN was released 1 month prior to Update, so that explains most, if not all of the variation in population report. Time will tell on production, however… (Thank you to LVDan on Blowout Forums for pointing this out).

To start looking at Heritage or Update, I chose a player that experienced a large increase in prices last season.

Christian Yelich caught fire between July and October, so Yelich is a good example for predicting what might happen if Acuña or Soto go off this season.

Since Yelich’s population report is the direct opposite of Acuña and Soto, his Heritage sells for more than his Update; however, selling price does not determine everything. 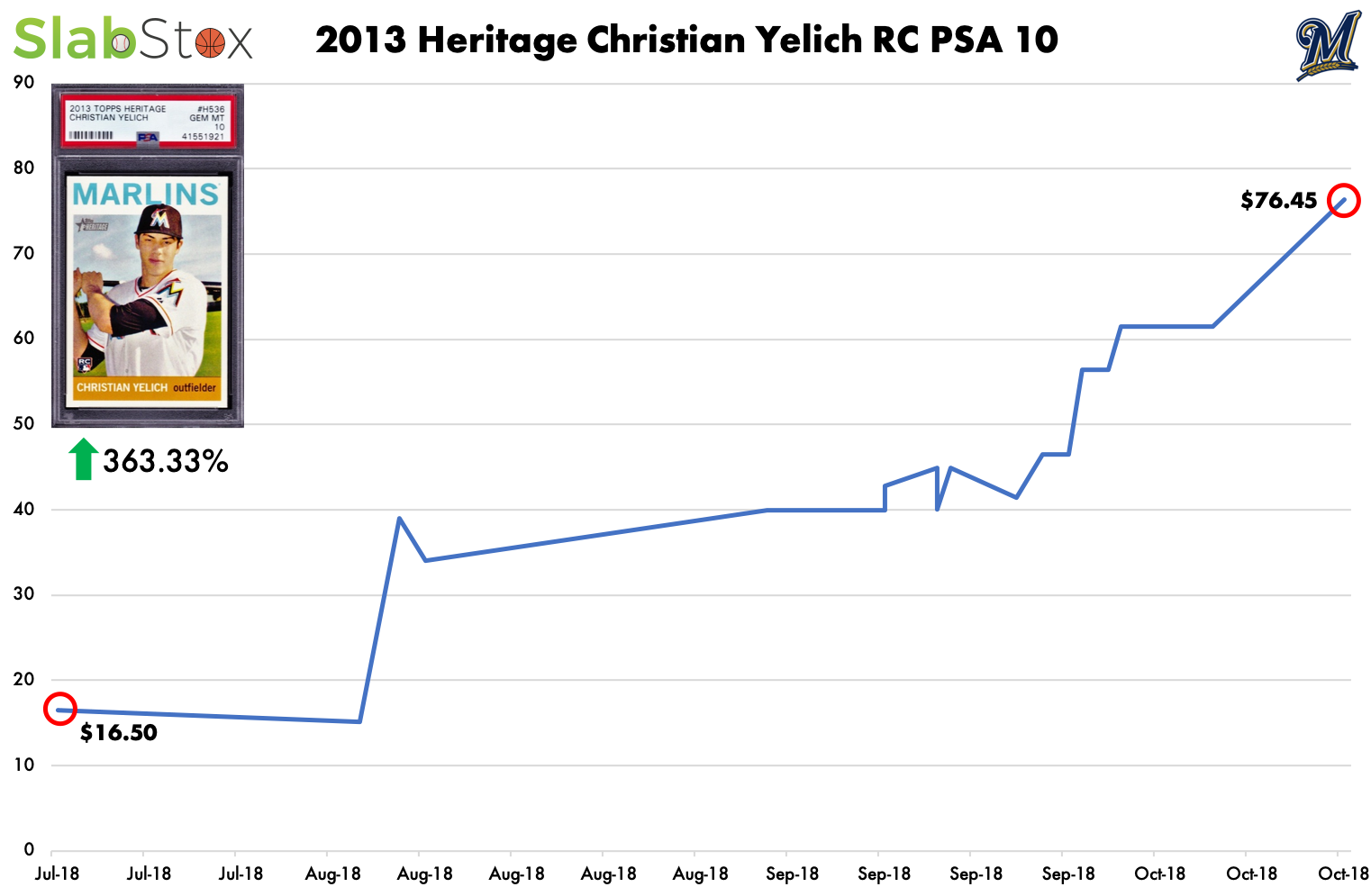 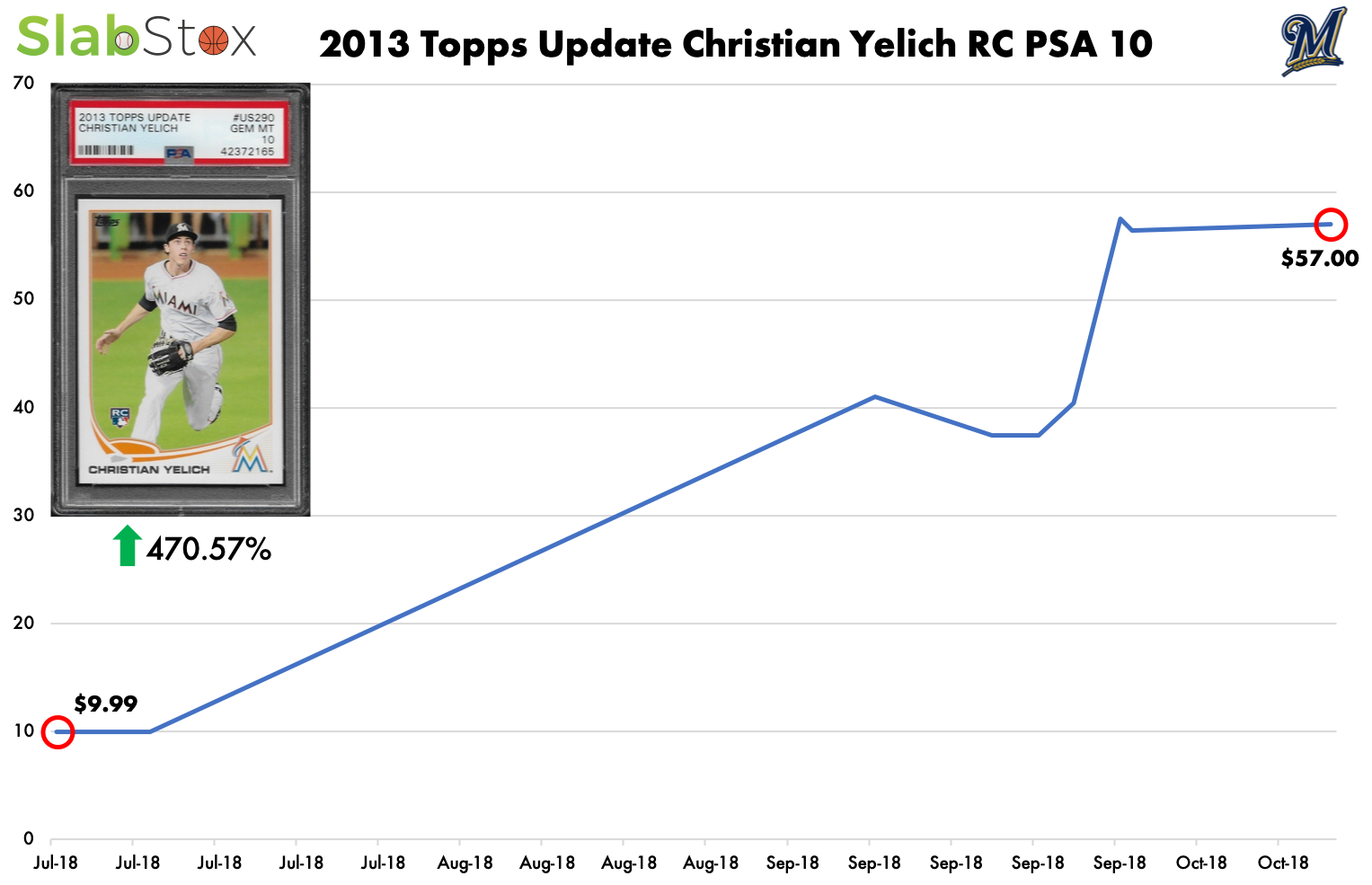 There are a couple key points to this:

Rookie Card to Invest in: Update

Man, I don’t even want to make a call on these two. I am a big fan of both and think they are the two premier young players in the league (outside of Ohtani IF he is 100% healthy).

Generally, I’d make sure to check past track record with rookies (minors), but both of these players appeared in over 100 games in their debut season, so sticking to MLB stats will be enough. Pitchers have had time to adjust to both by this point (even though more adjustments will be made this year).

When looking at Acuña’s 2018 statistics, the number that JUMPS off the page to me is his isolated power (ISO). ISO is a measure of raw power, taking their SLG and subtracting their AVG. The resulting number is the amount of extra bases a player averages per at bat.

Acuña’s ISO power was .259, good enough to rank him at 14th in the MLB and right between Aaron Judge and Nolan Arenado (!!).

Taking the Trout comparison even further (I know, I know… last one). Mike Trout’s 2018 soft%/med%/hard% on balls (percentage of balls in play with slow, medium, and high speeds) was 16.0/39.6/44.4. Acuña? 13.7/41.9/44.4. It’s crazy how their hard-hit percentage was the same, showing both of their ability to drive the ball. Combine that with his spray chart, and you’ve got an outstanding pure and power hitter.

There are not many things I don’t like. There is only one facet of his game I can point to, and that is his strike out rate.

Last year, he ran a 25.3% K-rate, which is a little higher than I would like to see. To go along with that, his K:BB ratio was 2.73:1. While these are short-term aspects of his game I do not like, I expect him to clean them up as he moves along in his career. At this point, I would 100% sacrifice a couple percents on his K-rate for his power ability. It makes him a top flight player.

Similarly to Acuña, what Soto does well makes him the player we love. What sets Soto apart from Acuña is his advanced approach at the plate.

There are also no red flags when it comes to K-rate. His K-rate was 20%, which is right in line with some of the MLB’s best in Mike Trout and Christian Yelich. Some people will say it is unsustainable for Soto to keep up with the best in these categories, but I see no signs of him slowing down or losing his approach.

While his power was not as impressive as Acuña’s, he still had great numbers. He put up 22 home runs on a .923 OPS, both insane at 19.

I am not even sure if I can call this section what I don’t like. In some sense, it could be called “improvements” (Same could be said for Acuña with his K/BB%).

The only place Soto was lacking in comparison to Acuña is ISO and hard-hit percentage. While these are things I would like to see Soto make strides to improve, he is a full year younger than Acuña. He has plenty of time to add to his frame and gain more power in his swing.

With all that being said, he is 20 for the entire 2019 season. There is a ton of time for this to improve, and I expect it will.

Who to invest in?

Now comes the million-dollar question: do you put your money into Acuña or Soto?

For starters, it is a GREAT idea to have some of both! Currently, I have a well spread out investment in both Acuña and Soto Heritage High Number rookies, with a bunch at PSA right now. I wish I have more Update, but I have a personal draw to Heritage, as it is one of my favorite products.

To choose one player, I would have to go with Soto, as much as it hurts me to choose. Acuña’s power is undeniable, but Soto’s advanced approach at the plate seals the deal for me. It is incredible to see a 19-year-old in his rookie season post the K and BB numbers he did.

He has plenty of time to add power to his game, as many star players do over time. I think we will see a .300 AVG, 30 HR, and .400 OBP season from Soto this year, with an All-Star appearance.

Lastly, the reason I would invest in Soto is because of the sheer number of rookies he has. He has a significant amount less than Acuña, and he also has parallels of his true flagship rookie (unlike Acuña because the S2 SP has no parallels).

Player to Invest in: Juan Soto 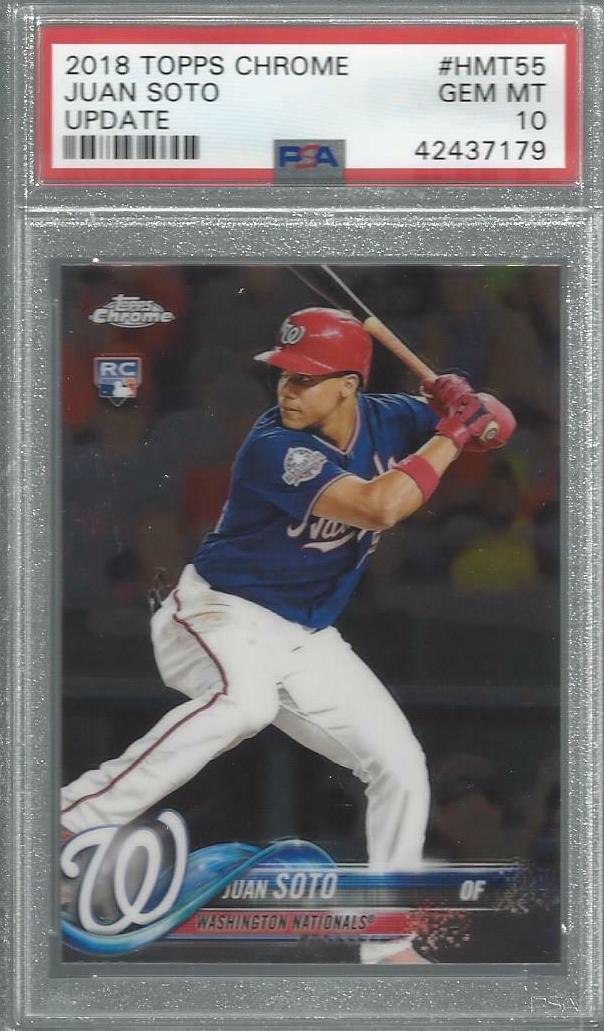 I know I did not specifically talk about it in this post (because it would not work in the comparison), but if you are investing in a single Soto card, go with his Topps Chrome Update PSA 10. It is the Chrome version of his base Update, and it will do the best in longterm value.

As promised, here are some of the Instagram community’s thoughts on this debate!

@flawlessgemsportscards: “Update and Acuña for sure”

@redsox_cards: “Personally prefer heritage, not necessarily for the investment just like the product better.”

@alleyoopcards: “Have to go with the Heritage Chrome, but if we are strictly talking about heritage base versus Update Base, update wins 9/10 times.”

@bsblcardcollector10: “Soto [for] either, but I like the way heritage looks better. I think Acuna has hit his market last year and we need to see what Soto will do this year”

@gda1224_cards: “For these rookies, I am currently stashing soto heritage. It is personal preference for me. Tend to open high numbers instead of update”

@elitecardsnstuff44: “Acuna and Update. Even though heritage would make more sense to invest in, the market seems to be more update oriented. PSA 10s of any good rookie are smart investments (Update wise)”

@willysportscards: “I feel as if topps update is more sought out as it is released earlier then heritage and a core product each and every year.”

@golfys_cards: “I like Soto over Acuna 100 times over. Their prices will reflect the fact that Soto is better.”

What and who are you investing in? 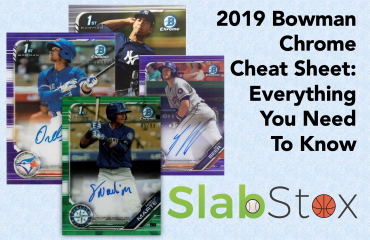 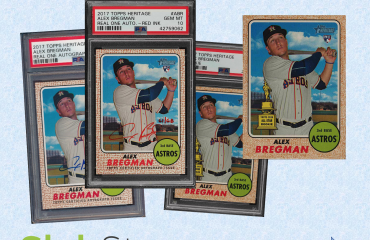