Solving a Seven Year Debate: Which Prizm Parallel is the One to Own? 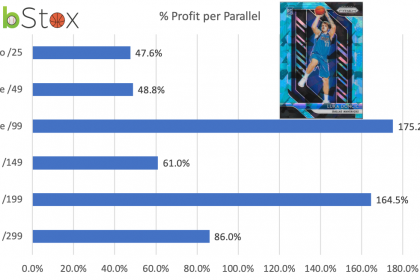 Luka Doncic. His aptitude for filling up stat sheets directly correlates with card prices that puts Ben Simmons to shame. The most recent mind-blowing sale was his Gold auto /10 from Panini Prizm, which commanded 203 watchers, and eventually a 25k price tag. And it’s not a fluke sale. His Fast Break and Sensational Signature 1/1 autos have hit 12.5k and 9k respectively, and a Light Blue Shimmer PSA 10 sold on auction for 7.5k. The combination of a generational talent and the premier set for top rookies makes for some sizeable figures.

Each year, the highly colorful release, Panini Prizm, drops in November and sends collectors into a rookie-fueled frenzy. This year, there were 36 different colored parallels spread out through retail, hobby, and FOTL boxes with close to 70% being serial numbered. While this makes ripping boxes upon boxes more exciting, it makes it tough for investors to figure out which parallel is the best investment.

While it may be too late to hop on the Luka bandwagon and ride it to a quick and sizable profit, it is not too early to begin thinking about next season. If you thought the Luka hype was insane, just wait until the 6′ 8″ beast, Zion Williamson, enters the league upon being drafted. Once again, next year there will be one incredibly hyped rookie, and the entire hobby trying to figure out which of his Prizm parallels is worth dropping a month’s paycheck on. If history truly repeats itself, the following charts will finally answer the now seven-year-old question.

The first chart shows the average price of each numbered parallel I selected in a fifteen day span, from release day to the final day of January. The six parallels were selected based off of number of sales and popularity within the community.

The prices were high in the first 15 days, dropped from days 16-30, and then rose steadily. Collectors bought into the hype early, realized they were overpaying, and then paid more and more as Luka kept shooting his way into highlight reels.

Moral of the story: DO NOT BUY IN THE FIRST TWO WEEKS OF A PRODUCT RELEASE.

I cannot stress this one enough. The prices decreased by an average of $75 from the first 15 days to the second. The highest price drops came from the /299 and /25, dropping by 18% and 17.1%, respectively. Compare that to the highest increase in price (Purple Ice /149) which was only 5.8%, and you can see why it is not smart to buy within the first two weeks.

The next chart simply shows the percent profit an investor would have made had they bought within the first 15 days and sold 75 days later. 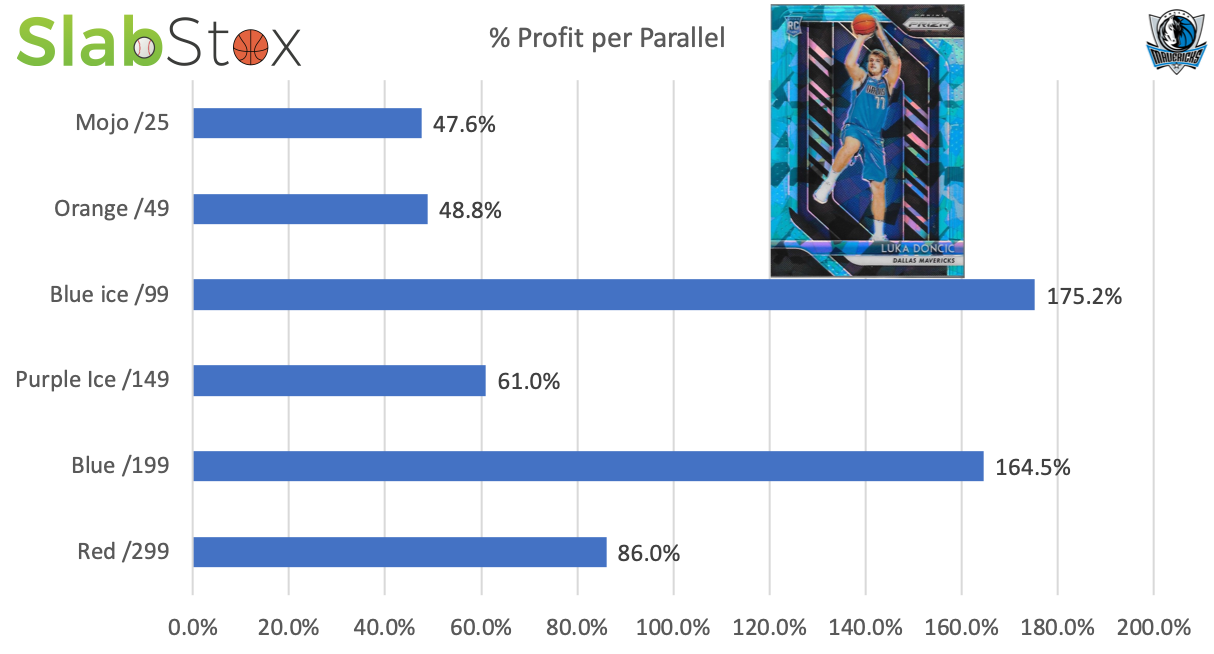 This finally gives us an answer to the driving question behind this piece. The Blue Ice /99 and the Blue /199 CLEARLY bring in the highest profit percentage, at 175% and 165% respectively. The next most profitable parallel (Red /299) comes at just above half the profit as the highest two. Part of this may be a result of the color of the card corresponding to the blue Mavericks jersey, but I cannot see that as the sole reason behind the crazy profits that they brought in.

To truly know if these trends are parallel to the overall Prizm market, you have to compare these numbers to another player’s Prizm sales. Part 2? 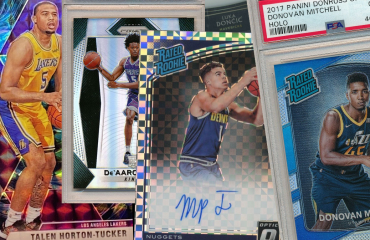 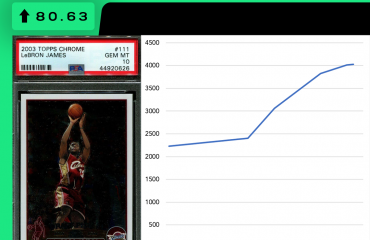 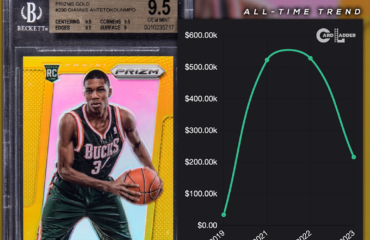